Immediately after the Deepwater Horizon oil rig blew up and it was known that oil was gushing into the Gulf of Mexico, people around the world started offering assistance to clean up the oil. There are many countries that have skimmers that can remove oil from water far more efficiently than any US technology can do it. A great unexplained scandal is why they have not yet been allowed to help, but it seems to have to do with overly cautious US bureaucracy. Now that hurricane season has arrived (and it's predicted to be a bad one), there will not be as many opportunities for skimming oil.

The first good news has arrived in the form of a Taiwanese tanker that [it is hoped] can scoop up 21 million gallons of water a day, separate out most of the oil and siphon it to a nearby ship, then put the cleaner water back in the Gulf. However, even it needs to wait approval from the Environmental Protection Agency, as current regulations won't allow it to put dirty water back in the Gulf - even if it's cleaner.

How much oil has spilled?

Since the Deepwater Horizon drilling rig blew up on April 20 until today (July 1), various estimates put the amount of oil that has gushed into the Gulf of Mexico at between 100 million and 200 million US gallons. Some of the oil has been siphoned, burned or skimmed from the water. The current official estimate of the remaining oil in the Gulf as of Thursday was 140 million gallons. It is estimated that 1.4 to 2.7 million gallons is being added to that each day.

Why is the Gulf Oil Spill Different Colors?

When I was collecting photos of the Gulf oil spill recently, I was puzzled why some of the pictures showed red oil, while some was the usual iridescent black.

Email ThisBlogThis!Share to TwitterShare to FacebookShare to Pinterest
Labels: oil

What Will Happen to All that Oil From the Gulf Oil Spill? 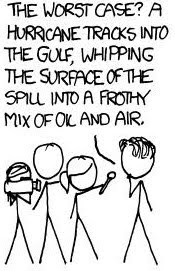 Some of the oil that has gushed into the Gulf of Mexico is being reclaimed by BP. The rule of thumb seems to be that if it has turned red, the oil is too "weathered" to be commercially viable, but if it's still black it may be salvagable with processing.

In a gigantic rescue effort, a small amount of the oil has been brought ashore manually - by boats and by people bending over and picking it up off beaches. The oil in liquid form will be put in injection wells, while contaminated solid waste will go to special landfills.

As part of the cleanup effort, some of the oil on the surface of the water has been set on fire.

The Automated Data Inquiry for Oil Spills predicts that about 35 percent of the remaining oil will evaporate, about 20 percent will find its way to the ocean, and roughly half will remain in the Gulf of Mexico - some on the surface and the rest dispersed throughout the water. 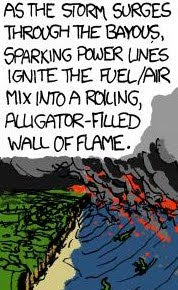 The oil that goes to the ocean will round the tip of Florida and then probably get caught up in the northward-flowing Gulf Stream. Simulations predict that that oil will flow close to the coast of North America.

The Gulf Stream eventually finds its way to the Norwegian Sea, where the cooled water becomes heavy and sinks to the bottom of the ocean. The trip from Florida to the sink will take about 18 months (based on this analysis of how long ashes dumped in Fort Lauderdale will take to get to England). After sinking in the Norwegian Sea, the Gulf Stream waters flow back south and reappear in the Pacific about 1,600 years later.

Some or all of the oil in the Gulf Stream will drop off en route. Tar balls may wash ashore. The oil may foul beaches and fisheries all up the east coast, although the simulations predict it will veer offshore long before Canada. Some of the oil will disperse in the Atlantic or sink to the bottom - which is reputedly already littered with tar balls from other oil spills and from chronic oil leakage from practices like dock degreasing.

A hurricane, tropical storm, or even plain old high winds could cause several problems. 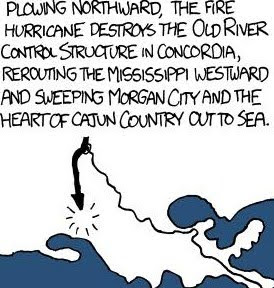 High winds could dislodge or destroy the booms that are containing some of the oil, causing the slick to spread further. They would also likely cause large waves that will drive more oil ashore.

The oil itself is a deadly carcinogen, and the tons of dispersants that have been dropped on the slick make it even more toxic. It might seem insane to add more poisons to the mix, until we get to the next hurricane problem - which requires that we get oil off the surface as quickly as possible, and which is the reason for the dispersants. 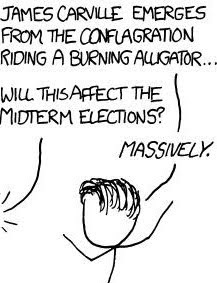 The biggest concern about hurricanes is that the toxic mess will be picked up by the wind and carried inland. It could be carried hundreds or even thousands of miles before it's dropped on crops and pastures (from which it will spread throughout the food chain) and it will contaminate lakes, rivers, reservoirs and the rest of the water supply.

Of the oil that remains in the Gulf, some will stay in the water forever. Some of it will seep onshore, especially into the salt water marshes that stretch inland for a hundred miles in places. Hurricanes, storm surges and other forces of nature will continue to carry it further inland, possibly for decades to come.

Many people seem to think that BP can pay the costs of the oil spill's damage, but this is way too big for a single company to cover.

(The comic is from xkcd.)

Let's all keep in mind that the BP oil spill is a big story because it's close to home and because it's a follow-up to the even bigger (in terms of newstand revenue) story of the Katrina disaster. Oil contamination of the oceans goes on all the time, and is greatly under-reported.

Nigeria has been devastated by oil for decades. The New York Times reports that an oil spill the size of the Exxon Valdez has happened every year for 50 years in the oil fields of Nigeria, with the oil gushing into sensitive wet lands. A recent article in The Guardian is even more devastating, saying that life expectancy has plummeted in rural Nigeria as the oil spills contaminate drinking water. Protest has been brutally repressed, epitomized by the horrific execution of poet Ken Saro-Wiwa in 1995. (Due to outrage at that atrocity, Shell finally paid $15M for its involvement, which was just one in a long history of human rights violations perpetrated by and for the oil companies.)

Like the Gulf spill, Nigerian oil spills don't just affect the local ecology. The oil flows out the Niger delta and into the Atlantic ocean. Also, over half of Nigerian oil wells are off-shore, and they're no safer than the ones on land.

Mexico had an oil spill in 1979-80 that held the previous record (140 million US gallons) and was only surpassed by BP today, at least according to current official estimates.

Tankers have spills at sea all the time that cause barely a ripple of notice.

Chronic oil pollution activities such as degreasing docks has also been chronicled as causing major environmental damage everywhere that oil is shipped.

Years ago I read an interview with a deep sea explorer who said that tar balls litter the floors of our oceans.

(There are also natural oil leaks, like Bush Hill in the Gulf of Mexico, but they generally become part of an ecosystem: the oil and gas is eaten by bacteria, which are in turn eaten by things like worms and mussels. Still, they sometimes result in tar balls washing on to beaches.)
###
1 comment:

The Singularity Happened... and I Missed It! 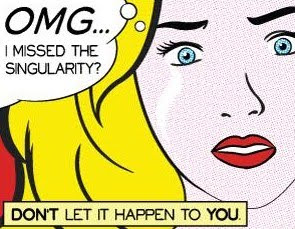 Why should we accept that transformative change can only be caused by artificial intelligence or genetic modification of the brain or encounters with aliens? What if it's something so profound that we're not able to predict it or even realize, at the time, that it's happened? What if it's something not even dreamed of by Ray Kurzweil or Charles Stross?

Old-timey sci-fi writers John Wyndham, Charles Harness and Theodore Sturgeon saw the future as human evolution. In More than Human, Sturgeon saw evolution as not just the development of psychic abilities but also the creation of multi-person organisms, leading to the next stage of man, homo gestalt.

In one of my [many] favorite sci-fi novels, Nancy Kress's Beggars in Spain, there's a sort-of singularity (arguably it's not fast or profound enough, but it's the same idea) that's a confluence of three events: breakthroughs in human genetic engineering, the invention of cold fusion, and a popular new religion that preaches libertarianism.

Female authors Margaret Atwood and P.D. James envision a future where a failed ability to reproduce is the cause of massive change. I don't see futurism as a feminist issue, but they do suggest a different direction - and the paranoia that we won't wake up to the change until it's too late. I suppose you could translate that paranoia to the singularity idea by suspecting that aliens are already among us, changing things quietly under the covers. Or maybe we simply can't comprehend the change that's happening to us personally, as I can't differentiate my personal development from the societal changes happening during my childhood in the 60s and 70s.

In Stross's worlds a singularity is akin to an apocalypse: overnight society crumbles and most people die. That's not an event that people would fail to notice. (Unless it didn't happen in the northern hemisphere, or wasn't good at selling papers?)