The Trouble with Buskers

Before I start in with the griping, I need to say that I love the Uptown Busker Festival. I like the pulled pork barbecue and the cheesey kiddie rides. I love the two guys dressed as mounties wearing puppet horses marching around looking serious. I love the whole carnivally feel of the thing. But I have a beef with the buskers.

It seems to me that when this event started in Waterloo a number of years ago, the buskers did full performances. But now they all seem to have about one minute worth of material to fill up 20 minutes of routine. I get that they want to do some patter to attract a big crowd, but it needs to be better patter. Or more tricks. Or a better split between filler and performance. Pulleeze. 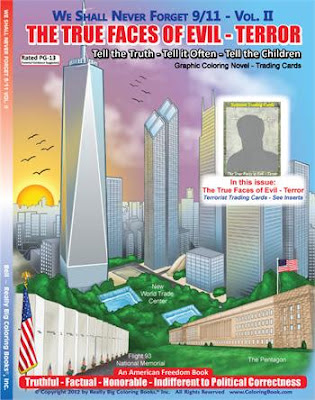 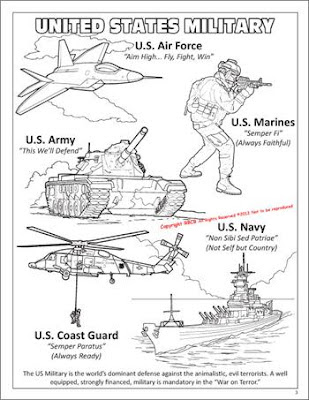 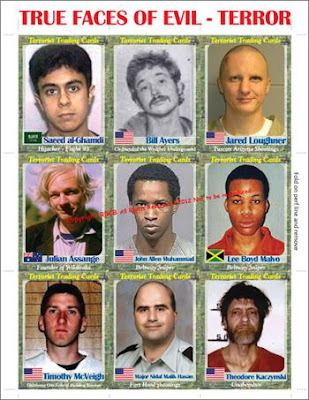 The We Shall Never Forget 9/11 Vol. II The True Faces of Evil - Terror, rated PG-13, is about the real world. It is about being human: Good vs. Evil. There is no fantasy in this book. Designed as a consumer friendly, family publication for use with children and adults, this excellent graphic coloring novel helps expand understanding of the factual details and meanings in the War on Terror.

Inside this edition are several pages of perforated, removable card-stock terrorist trading cards. Inspired by real people, real life and reflecting the truth, Vol. II presents terrorism in direct open simplistic terms: what it is, what it looks like and what it means. In this book you will find names, dates, numbers and locations exposing the men, women and governments behind terror as we begin to hold them accountable. Details include a letter from within the Department of Homeland Security signed by five current Congressional Leaders a service organization page directed to the public and family friendly action notes, and The Congressional H.R. 847, the 9/11 Health & Compensation Act. Also in the book is a recap of the original 9/11 Coloring Novel published in August 2011.

Composed with a clear message the graphic coloring book novel calls out for open and honest discussion. We educate children about something besides the "TMZ Society" which bombards them with "important" news. Truthful and honest education about serious subjects for youth is an essential part of learning and considered a critical step in beginning to comprehend the world in which we live.

In describing the inherent bad nature of a terrorist we have included their horrific crimes. This is Good vs. Evil. We Shall Never Forget 9/11 Vol. II Terrorist Trading Cards clearly identifies the evil that may sit next to you on an airplane, or it could be an avowed Atheist in the parking lot of your local grocer on a sunny morning.The world should look at them, make fun of them, name them - shame them, recognize who they are and rid the earth of them. No comic book published, nor any nightmarish fiction written, can compare to the absolute evil pictured in this book. And realize as well "They" are not finished. Imagine a terrorist with a nuclear bomb.

****
Meanwhile, here's a really interesting article on Assange in the Guardian: The bizarre, unhealthy, blinding media contempt for Julian Assange

If you go to Google News and type RIM layoffs and sort by date, you'll see a whole bunch of articles about the recent layoffs in Halifax: exact number (95), how it was done (employees were called to a meeting and told by video conference), how employees feel about how it was done (some are angry), and more.

Waterloo is a town of 100,000 where RIM recently employed over 10,000 people. Layoffs affect commercial real estate, residential real estate, the tax base, the health of most local businesses, the economic optimism of the community, and more. In an earlier post (RIM and Waterloo), I quoted someone as saying that every job at RIM creates seven other local jobs. As a city, we need to know numbers. As a community, we need to know what's happening to our neighbours and acquaintances.

RIM is notoriously careful about publicity. There have been persuasive arguments that, for its own good, RIM should be more transparent in this process (Lessons learned from layoffs in Yahoo Finance).

However, RIM seems to be more opaque than ever about the Waterloo layoffs. There is nary a mention of Waterloo layoffs on forums.crackberry.com or bgr.com/tag/blackberry. I talked to some local media who said they are trying to find out what happened but are still in the dark.

If RIM won't step up, then maybe people who know what's going on should consider speaking up. They could call or email The Record, The Chronicle, CTV or 570 News Radio.

Earlier today, Britain said it might revoke Ecuador's diplomatic status and stage an assault on the embassy to get Julian Assange out. (link)

This is over an extradition request by Sweden on a charge that even if true would not be a crime in Britain... and there is much evidence that it is not true.

How far will Britain and Sweden go to help the US get their hands on Assange? So far:
All because Assange embarrassed the US. This is the most outrageous anti-democratic event of the century. We the people need to stand up for Julian Assange. The US has made a massive effort to discredit him, but his work stands for itself, and the world will be a poorer place if he is stopped from persuing his work of exposing the secrets of big corrupt organizations. Even I have to wonder: What will the US do to me for writing this? Where is free speech now?
###
4 comments:

In January 1974 I saw Bob Dylan perform at Maple Leaf Gardens in Toronto. It was Dylan's first tour in eight years - the first since I was eight - and Dylan was an uber-icon. I was a pro at scoring good seats, but even though there were two shows the best I could do was on the side and high up.

The concert started late and the crowd was restless, by which I mean drunk, stoned, loud and obnoxious. Finally The Band came on and did a couple of songs. Then this guy came out with a big hat pulled down over his face and started singing Lay Lady Lay. I leaned over to my friend sitting next to me and asked, "Who the hell is that?" The guy behind us leaned in and shouted at me, "It's Dylan, asshole!"

I was expressing incredulity more than asking a question. Dylan wasn't singing the same melody he had sung on New Morning, and he was screaching out the lyrics instead of the rounded tones of his recorded versions. Dylan's singing has never been particularly musical, but his performance that night was six steps worse. He was unrecognizable.

In the previous couple of years I had been to a lot of concerts. Stadium concerts were a pretty tight show back then and I had never been disappointed by one.

This Dylan concert was something else. Only part of it was that Dylan sucked: he sang badly, stripped all the melodies from his songs, never looked up, never said a word to the crowd - and he was on stage only intermittently. The format of the concert didn't work: The Band was too different and too distinct to interspere their music with Dylan's. Also, there was a really bad vibe in Maple Leaf Gardens that night. A few drunken louts kept screaming during the songs.

After it was over and we were walking out my friend realized he'd left his mittens at his seat, so we went back into the now brightly lit, empty arena. All around our seats there was vomit and smashed liquor bottles, drug paraphenalia, fast food wrappers, cigarette butts. It hit me like a fist to the gut that this wasn't about music or even entertainment; this was just a place for druggies to hang out. The sixties ended in lots of different ways, but that's how they ended for me.

Just a couple of months before that January concert, folk singer Phil Ochs, depressed by a flatlining career and taking self-destructive risks, got mugged and strangled in Dar es Salaam, Tanzania. I didn't know at that point if he'd even survived the attack, and rumors were circulating that he'd permanently lost his voice (which turned out to be true).

While Dylan was too smug, Ochs was too needy. Ochs was too upfront about wanting more success; it was uncool. Other than that one characteristic, I think he could have had all the success he craved. On the other hand, Dylan's success always had a lot to do with his creation of himself as an icon - his lies about his childhood and early career, his manipulation of people.

I saw Dylan again in 1979, during his born-again Christian phase when his fan base fled, and finally saw a great Dylan show. It was at The Aud in Kitchener, with a tenth the number of seats of Maple Leaf Gardens. I wouldn't have even gone but a friend talked me into it, and boy was I glad.

Bruce Springsteen once said that the first time he heard Like a Rolling Stone it was like someone kicked open the door to his mind. Dylan's music was like that for me too.

I got to thinking about all this when I recently rewatched D.A. Pennebaker's documentary Don't Look Back, which provides a snapshot of a few days Dylan spent in London during a 1965 tour. Dylan seems impossibly young in the film, nasty and bombastic, and also isolated and lonely. The film is popular with Dylan fans, and I have never heard anyone say that Pennebaker meant to be critical of Dylan: I have to think that the maker and the fans of the movie held Dylan in such high regard that they didn't see anything unattractive in the scenes where he yells at people, makes snide comments about a fellow folk singer, and even - right at the end - calmly picks his nose.

Email ThisBlogThis!Share to TwitterShare to FacebookShare to Pinterest
Labels: memories

I'm not giving up on Yappa Ding Ding (which I have been writing for going on seven years) but I have started a work blog, Focus on Readers. It's a work in progress and as with many of my ventures, I have no idea where it will lead...