Here's a photo from the inside of the washroom in the COC Friend's Lounge at the Four Seasons Center for the Performing Arts in Toronto: 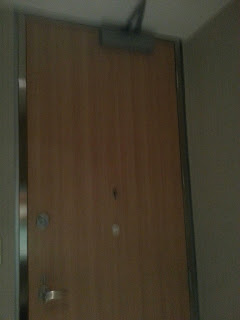 (Sorry for the fuzziness. The light was really low and I was using my phone.)

The dampening arm at the top prevents the door from slamming - or maybe it's there to ensure that the door shuts itself - but it also makes the door very heavy to open. The Friends Lounge is largely used by elderly people, and it's difficult for some of them to open the door. I had to help someone today.

The typical solution would be to put a handicapped door opener on the door (with one of those big silver buttons). That's really expensive and it doesn't work when the power is out.

Instead of all those handicapped door openers, why not just remove the dampers and hang the doors so that they can be swung with a finger push? A stick could be added to make them pullable by someone with a walker.
No comments:

Email ThisBlogThis!Share to TwitterShare to FacebookShare to Pinterest
Labels: accessibility

Stealing a car to steal a truck

When I first moved to Africa my employer assigned me a luxury double-cab pickup truck. I quickly learned that that particular model was the number one choice of car jackers (a particularly nasty form of crime that was rampant in Tanzania at the time). So I gave back the pickup and asked for the cheapest vehicle they had, which turned out to be a small, very basic Suzuki Samurai. But then I learned that car jackers' number one vehicle preference for car-jacking double cab pickup trucks was, yes, the Samurai - so the Samurai was in fact the most stolen vehicle in the country.

What has all this to do with Conservative strategy in attack ads?

The ad this week was a light lob to energize the Conservative base and generate some revenue. The revenue will likely be used in a massive onslaught aimed at undermining Justin Trudeau with the Canadian populace. The timing of that onslaught will probably be determined on the fly: when Justin makes a gaffe or has a dip in popularity or an election is imminent, the Conservatives will be ready to take advantage of it.

I mention this because Liberal supporters in the Globe comments sections are so confident that Harper's attack ads can't hurt Justin. I hate to see us underestimating Harper again. There is no doubt in my mind that it was attack ads that brought down Ignatieff in 2009. He was riding high in the polls, but the "Just visiting" attack ads raised a question mark that sapped enthusiasm even from staunch Liberal supporters. The effect of the ads was brief, but just long enough to throw Ignatieff off course. And as we know, he never recovered.

The Conservatives have pioneered the practice (in Canada) of running attack ads outside of election campaigns. It is a weapon that has been extremely effective both in generating donations and in undermining other party leaders. The Conservative ads aren't truthful (the one this week used a quote so out of context that it totally misrepresented his words) and their impact is short term, but that's all they need.

I don't see how we're going to survive without joining in. I'm not suggesting that Justin should try to become a nasty pit bull character like Harper: I think we need attacks that come a step away from the leader. Just as high schools have nice-guy principals and disciplinarian vice-principals, we need an attack dog in the upper ranks of the Liberal party, or a new generation of Rat Pack.
1 comment:

I supported Justin Trudeau. I voted for him for leader. But I had no idea he would burst from the gate with such incredible vigor. He has far surpassed my expectations. He has outperformed the much more seasoned leaders of the government and official opposition. And he has shown an aplomb that defies typical political handling. He's sincere, honest, frank, thoughtful, and obvioulsy extremely intelligent and politically astute.

Can he keep up this pace? Can he continue without making a gaffe? Obviously not. That's impossible. But then I would have said that this week was impossible.
1 comment:

The right to bear pressure cookers

So the main import of the events this week in Boston is a demonstration that the US is not invulnerable to another terrorist attack. Of course it was never invulnerable, but a lot of people thought it was. A mythos had developed that US authorities have been able to keep the terrorists at bay. Surely nobody still believes that.

Does this change anything? Will Americans become more fearful? Will terrorists be emboldened? And in the end, why do a few people killed by terrorists matter so much more than the thousands killed in other sorts of American violence?

I don't want to sound unsympathetic. I'm an American by birth. I don't want to see anyone hurt, ever. But there are some bigger issues here than outrage at the actions of two young men.

Here's a still from the first Harper attack ad against Justin Trudeau, which was released about 12 hours after Justin became Liberal leader. 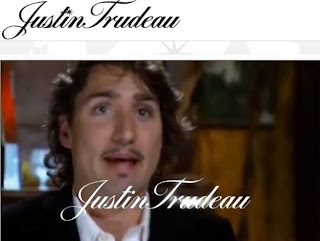 It's a weird ad. I thought with all their money the Conservatives could come up with something more effective. They're obviously trying to ridicule him, but...
I got an email today with the following text (and I think it's pretty classy that he also asks for donations to the liver foundation). This is the email:

The Conservatives are already back in the gutter.

Now they're using pictures from a charity fashion show to attack me and undermine what we've built. Can you chip in $5 to help us get out our positive message of change?

They've seen what we can do and they're desperately trying to drown us out with the childish, food-fight politics.

We need to move past that - donate $5 or more now and stand up to these guys:

P.S. I raised a bit of money for the Liver Foundation but I bet we could raise more if you made a donation too.

The best way to put a stop to this negative advertising is to make a donation against it! (I did.)
1 comment:

I admit it: I'm a worrywart. At our last leadership convention in 2006 Conservatives played dirty tricks, circulating fake buttons and posters to try to discourage delegates from voting for Bob Rae. Has Harper dropped another little turd to surprise us with on Sunday? It's probably fine; I haven't heard even a murmur of suspicion; but I can't help worrying.
5 comments:

Governments are longing for WikiLeaks... or should be

So the International Consortium of Investigative Journalists scored the largest leak in history, and they've got the names of thousands of people with off-shore bank accounts, many (or maybe all) of whom are tax evaders. They have more than names: they have emails detailing fraud; they have transactions; they have amounts; they have account numbers... they have all the things a prosecutor needs.

But the problem is that the International Consortium of Investigative Journalists doesn't want to let anyone see their info. They say that it's a journalistic principle, but I suspect it has more to do with hoarding valuable intellectual property. They can dole out this stuff little by little in all sorts of stories and make a mint.

The Canadian government is apoplectic, arguing (reasonably) that there is a law on the books that any Canadian with knowledge of tax evasion over $100,000 must report the info to Canada Revenue Agency. The CBC (the sole Canadian member of the International Consortium of Investigative Journalists) is standing firm.

It's got to be the case that the US government is similarly desperate to get its hands on all those details. The irony is that if WikiLeaks had the info, they would make it all public. WikiLeaks doesn't hoard info so that it can enrich itself by dribbling out tidbits. WikiLeaks works for the public good.

...which is just why the US government is engaged in such a malicious attempt to wipe WikiLeaks out.

I'm watching the leadership convention live at liberal.ca/live. It's great - John Turner is giving a very funny speech at the moment - but the tribute to Bob Rae is bittersweet, given that he was denied the chance to run for leader... again. Last time, it was decided we needed unanimity so Bob was pressured to bow out and let Ignatieff run unopposed. This time he was told he couldn't run because he was interim leader.

I will happily vote for Justin Trudeau, but Bob was always my first choice.