Back in 2011, the Record asked me to write an op-ed about the LRT (link). I outlined my major problems with the LRT proposal, including: "Waterloo Park will be sliced in two by trains. It seems likely a fence will be required, especially since the tracks border a children’s zoo. This will leave the park looking like postwar Berlin."

That reference to the Berlin Wall caused a big kerfuffle. LRT supporters claimed I was being hysterical: there would be no fence; in fact, the tracks would roll through grass in an attractive way and enhance the park setting.

This week it was announced that there needs to be a fence along the tracks in Waterloo Park and that it must be at least 6 feet high. This completely cuts the park in two. Add to this Kitchener Mayor Berry Vrbanovic's concerns about unsightly substations that will line the route to power the transit system, and postwar Berlin is starting to look pretty accurate. I wish I had been wrong.

It just breaks my heart what the LRT is doing to Waterloo Region. In the first place, it's too expensive - so expensive that it will suck all the air out of any other initiative for decades. (Just look what RIM Park did to our budgets, and it's a drop in the bucket of what LRT will end up costing residents of Waterloo.)

The route is ridiculous - going through Waterloo Park and the UW campus instead of heading straight down King Street North where a huge density area has developed. I am absolutely certain that the only reason the Powers That Be chose the campus route is that they need students to up their ridership numbers - even though student riders don't add one dime to revenues. Students are young; they can take the bus. The aging population - and the growing problem of impoverished seniors - is totally a non-issue for the people who forced the LRT on us.

During the LRT discussions I met with many politicians and staff members. It was beyond frustrating to be constantly met by lies, obfuscation and stonewalling, especially by Waterloo Region staff. They totally poo-pooed my concerns about traffic on Park Street, but now Thomas Schmidt is casually quoted in the Chronicle as saying that traffic police may be required at Park and Green after the LRT is built.

I went to just about every public forum on the LRT, and witnessed first hand that the public was lied to. In surveys, about half of local people supported the LRT; few people showed up at the anti-LRT rallies I helped organize. But people are going to be mighty unhappy once they see what they were tricked into.

Oh, one more thing. There's a perfectly reasonable solution to the fence problem. For the short distance that the train passes through the park, have it go slow. Presto-besto: no fence is needed. Freight trains have gone through the park for as long as it has been a park, and we never needed a fence BECAUSE THEY GO SLOW. I wrote Waterloo's mayor about this and he said he'd pass on my email to the LRT planners, but I know from sorrowful experience that they won't listen, not even to the Mayor of Waterloo - these outsiders who aren't elected and don't even live here want to save two seconds by running fast trains through "the Jewel of Waterloo", so we'll just have to live with a Berlin Wall that slices our park in two.

I'm supposed to tell you you missed your flight

Not since "Did you get pears?" have I been so entranced by a Mad Men line.

The next day Don finds out that Rachel died the previous week. He goes to her apartment (where her family is sitting shiva) and meets a sister who knows about their affair (Don was married to Betty at the time) and is quite hostile. In the background, Rachel's children are very prominent. Since (if I recall correctly) Rachel dumped Don abruptly and married quickly, it seems possible that the eldest is Don's. Or maybe they're twins and both are Don's. 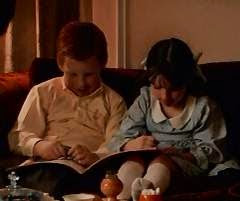 It's quite possible that none of this will ever get explained.
1 comment: