I first understood accessibility issues in uptown Waterloo when my mother started using a walker. My mother lives in easy walking distance of the uptown. Her health and emotional well-being were enhanced by a daily walk to uptown, but accessibility problems often prevented her.

When my mother started using a walker, many of her favorite establishments were closed to her: Whole Lotta Gelatto, Wordsworth Books (in its original location), Uptown 21, and many others. The main culprit was a large step up from the sidewalk. An additional problem was buildings with two entry doors and a tiny vestibule - you just can't hold on to a walker and pull open a heavy door in a cramped space. The accessibility of toilets (the thing most people focus on) was the least of her worries.

Getting into stores was not her only problem. Navigating the two blocks from her apartment at Erb and Willow was increasingly difficult. All of her routes presented challenges:
- The sidewalk on Erb St between William and King is broken and bumpy. She managed it for a while, but it made her arms ache and she eventually had to give it up.
- The path that runs along the railway tracks from Willow to King would have been ideal, but it is ungraded, unpaved, and unfinished. She tried it but couldn't manage certain parts, like crossing the tracks.
- The sidewalk on William between Willow and King is a longer route but the sidewalk is smoother. However, the pavement was frequently obstructed with dirt or branches.

Here's a stretch of bumpy sidewalk on Erb near Peppler: 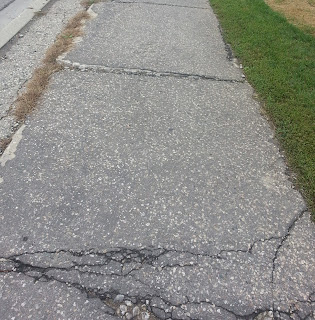 In the winter my mother often became a shut-in because of uncleared snow. The south side of Erb between Peppler and Regina was particularly bad, but she couldn't cross at the Peppler crosswalk because the bump left by the snow plough was never cleared. People have to climb over the snow pile to get from the sidewalk onto the crosswalk. Even when sidewalks were shoveled, they frequently were so poorly cleared that she had to navigate over packed snow and ice.

Her problems didn't stop when she got to the uptown. Many of the pavements on King Street are broken and bumpy. In winter portions tend to not be salted, and can be treacherous with ice. Increasingly, where she was able to go depended on the state of the sidewalks on King.

My mother is not an isolated case. The uptown is heavily populated by seniors: the Adult Recreation Center (ARC) at King and Allen, Water Park condos (mostly senior), Terrace on the Square retirement home, and others. You frequently see seniors with walkers and scooters navigating through the uptown. I once saw an elderly woman with a walker take a bad fall on an icy sidewalk on Park near William; she landed on her back and had passing motorists not seen her, she would have been stuck there for some time.

Beyond seniors, there is a large and vocal community of wheelchair users in Waterloo. They appear at every public forum and make the case very persuasively that the uptown is not accessible. All the politicians and staff listen and agree with them and promise action. This has been going on for years and years and years, and yet the problems persist.

Accessibility is part of the Uptown Streetscape Improvement project, which has been languishing in the planning stage since 2004. A new round of public forums is currently in progress but frankly, I have given up on these public forums: I don't believe that anyone is actually really listening. Once council has agreed on a principle, like improving accessibility, why not make a commitment to make some improvement every year? (And rather than endlessly asking the public what they want but only attracting the same small group of activists every time, why not do proper market research?)

In Kitchener, Belmont Village was made accessible with very little fuss a couple of years ago. Every business with a step got a small ramp, as shown below. It's my understanding that the businesses chipped in to the cost. 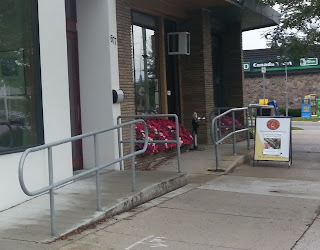 Installing ramps in the uptown is made more difficult by planters that make the sidewalk very narrow in places: 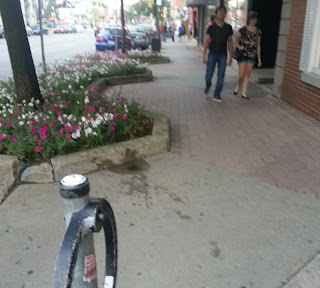 When the Ali Baba closed on King near William, the owners of the building did a fantastic job renovating the building. It was a major renovation and it looks great, but why weren't they required to make the entrance accessible? We have a Complete Streets policy whereby whenever we make repairs to a street, we have to add bike lanes. Why can't we have a similar program for accessibility? It's outrageous that this brand new entrance in the heart of uptown has two steps and no ramp. It would have been so easy to make this restaurant accessible to everyone. 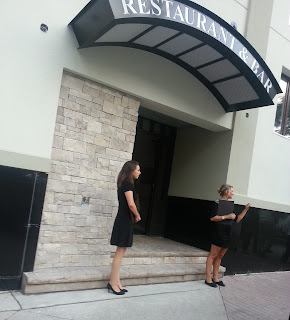 Waterloo woke this morning to the sad news that the main building of the St Jacobs Farmer's Market had burned to the ground. Already there is an outpouring of sympathy and support to the owner, Mercedes Corp. I am afraid that this post has a somewhat different tone. I see this tragedy as an opportunity to rethink our approach to the market - and make some substantive changes.

In a 2009 post (Market Memories) I was quite critical of Mercedes Corp. I wrote that post when Mercedes shut down the Waterloo Mennonite market and moved the vendors across the street to their tourist-oriented site, which locals historically called the Stockyards. That site is now our sole farmer's market - the St Jacob's Farmer's Market - and is the site of last night's fire.

A farmer's market is part of our heritage, an important part of our economy, and a vital link between the rural and urban parts of our community. It is much more than a tourist attraction. It is a resource for the community: for farmers and small businesses to sell their goods, and for people to purchase locally-made food and other items.

Mercedes Corp did not invent the market. We always had one. Mercedes Corp was somehow able to purchase the market, but many of the shoppers and best vendors predate Mercedes. Over the years I have increasingly felt that the market should not be in private hands, or at the least should be more influenced by the needs of its stakeholders.

My particular concerns are:

1. I am concerned that Mercedes Corp does not provide a fair environment for the vendors. The vendors seem to have no security - apparently they can be (and are) moved or kicked out without notice. I haven't asked vendors recently about the price they pay to have stands at the market, but a few years ago they said that the prices were doubling and then tripling. The vendors are rationally afraid to speak out, but the ones I talk to say that their sales have dropped as the number of visitors increase: the marketing strategy of Mercedes Corp has attracted too many non-shopping tourists, or people who are there for cheap sunglasses and tube socks. This isn't a new problem, but it continues to get worse.

2. I am concerned that Mercedes Corp does not provide a safe and convenient environment for shoppers. The aisles are too narrow for the crowds. That means that people waiting to buy on both sides of the aisle leave only a narrow space for people trying to move down the middle. The problem is compounded by the many enormous baby buggies. The overcrowding isn't just inconvenient; it's unsafe: God forbid something happen during market hours. (The new building should have wider aisles or it should have bollards that prevent non-pedestrians from entering the shopping aisles.)

3. I am concerned that the business model of the current market allows only for vendor-businesses, and shuts out homegrown initiatives. I remember one summer buying sweet peas from two teenage boys who had created summer jobs for themselves by planting a lot of flowers and renting a table at the market for part of the summer. You used to see a lot of that sort of thing, but the current market seems to have no amateur or short-term vendors.

4. I am concerned that the market is no longer Mennonite-friendly. There are fewer and fewer Old Order Mennonites there, although there appear to be some vendors who impersonate Mennonites (heavy eye make-up under a bonnet is a suspicious clue).

I'm 55 now. I've been shopping at Waterloo's farmer's markets since I was 7, and I still go to the St Jacobs market weekly. I do hope that the building will be replaced speedily, for the good of the vendors, the shoppers, and Mercedes Corp. I strongly believe that the new market needs to be more attentive to the needs of its stakeholders, but I fear that Mercedes Corp will use this opportunity to make the market even more commercial and take it even further from its roots.