Costumes
Throughout, the costumes were an unfortunate distraction. They didn't enhance the characterization or help to set a tone or place. They were unflattering. Poor Waltraud Meier, who played a thrilling Waltraute in Gotterdammerung, had a bodice about three inches too low for her age, and the typically over-close Met HD camera work never let us look away from her huge cleavage wrinkles. I don't even want to remember Wotan's giant leather pants or the faux-leather codpiece-bedecked gods in Das Rheingold.

Lighting
At times, the harsh white lighting made the filming look like a 1970s era sitcom. I'm a fan of well-lit operas (the Toronto Ring was so dark that I couldn't see whole chunks from my seat at the back of Ring 3), but this production was at times ridiculous.

Cinematography
Good god, when will the Met HD get it together in the filming department?
The cast
There were a lot of geniuses in the cast, but in Met performances you expect them all to be great: great singers and great actors. This Ring had too many weak links. At its center, Deborah Voigt's middle register is not pleasant to listen to: it has a strained sharpness. In addition, she mugged and aped without creating a believable Brunnhilde. The problem with her acting could have been one of scale; she was acting for the back row and it didn't work on the big screen. But surely the director should have figured that out. This was Voigt's first Brunnhilde and she clearly wasn't ready.

The other main characters were superb, as you'd expect, but there were problems with some of the small parts. Patricia Bardon was an embarrassment as Erda in Siegfried (and you had to wonder if her dress threw her off: it clung tightly to her full body including her hands and was covered with sharp-edged pieces of broken mirror). In the broadcast of Gotterdammerung, Iain Paterson as Gunther was very uneven: his acting was wonderful but his voice was at times warbly and weird. There were little glitches like that throughout, and that just shouldn't happen in a Met Ring Cycle. 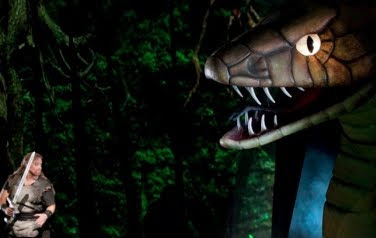 Special effects
Siegfried establishes himself as a hero by killing the terrifying dragon (and giant) Fafner. Lepage's dragon looked like a big, silly muppet. It was hands down the worst special effect I have seen in a Ring cycle - and this from Lepage, the supposed master of FX. When special effects failed (as also happened with the horse and on several occasions with The Machine), I kept suspecting that what we saw was an incomplete idea or a last-minute substitution.

And then, of course there was The Machine, which dominated every single goddamn scene - that's four operas: 15 hours of looking at a giant xylaphone. It had its advantages: it served as a screen for some good animation; it was nice that there was never any need for scene changes; and some scenes worked. But ultimately it was a failure. It was there all the time, and three-quarters of the time it shouldn't have been. It was a distraction from the opera. It forced the singers to do most of their performing on a thin strip at the front of the stage. And we spent half the opera staring at the castors on the end of the planks - how I came to hate those castors! 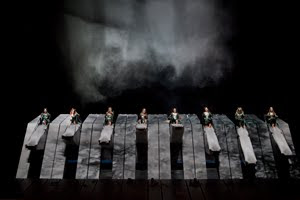 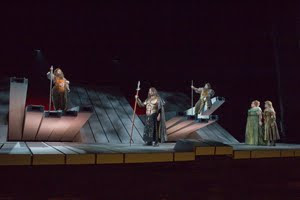 After all the deficiencies and flaws in the four operas, the really unforgiving thing about Lepage's Ring Cycle was the ending. Or should I say non-ending. The ending of the Ring Cycle is paramount. After all the emotional highs of the series of operas, the ending should be a great emotional release. The final bars of the score are the lietmotif of humanity: the coming of a new era after the age of the gods. What did Lepage show us, after Brunnhilde sat on a fake horse and rolled towards an underwhelming funeral pyre? --Some statue heads exploded and then there was nothing for the last several moments: just the ugly xylaphone. It meant nothing and it emoted nothing, except disappointment.

I'm a huge Lepage fan, having seen several other operas he's directed (Damnation of Faust, Erwartung, Bluebeard's Castle, The Nightingale and Other Short Fables). In a 2009 post I reviewed his 9 hour play Lipsynch. I'm a huge Ring Cycle fan, having seen the 2006 Toronto production, Otto Schenk's previous Met production, Francesca Zambello's 2011 San Francisco Opera production, and others. In fact, I'm hard to disappoint on either count, but Lepage did it... and I think that calls into question his approach of theater as experimentation. It's one thing to create a play like Lipsynch in an iterative process over several years. It's another thing to present a half-assed, unfinished Ring Cycle at Lincoln Center.

Update: This post was quoted in Macleans. Update 2: I went to New York to see this production remounted in 2019. The problems with is were all resolved to my satisfaction--or at least there were fewer so I didn't mind them--and it was fabulous.
3 comments: