I don't condone terrorism at all. But the western military involvement in Afghanistan is a humanitarian disaster, and Afghans who fight to end it are not necessarily in the same class as religious fundamentalists who want to punish the west for holding different values.

When a community is occupied by military forces who round up innocent citizens and transfer them to people who torture, abuse and in some cases kill them; when bombs are dropped by planes on a regular basis; when regular citizens are regularly killed; when infrastructure is destroyed; when a country turns into a chess board for foreign powers to fight over - we have to expect that people are going to fight back.

A lot of Afghan "insurgents" aren't Taliban or gangsters but just people who are protecting their homes and families. Western media presents the occupation as humanitarian, but it isn't. We are killing innocent people. Their families are fighting back. The longer we continue to kill Afghans, the more Aghans are going to become "radicalized."

There is incontrovertable proof that Canada had a policy to pass on Afghans we detained to people who would torture them. Our roundups captured a lot of innocent people. When this came out in the press, most Canadians didn't care. Our government was very clear that it didn't care. Don't you think that might be a reason for an Afghan-Canadian to become "radicalized"?

The latest terrorist plots are homegrown in that our military policy is creating them. Our government's policies appear to be breaking international law. In order to cover up their acts, Harper took extraordinary antidemocratic measures, including disrupting parliamentary committees, smearing whistle blowers and shutting down parliament. This whole situation smells very bad.

Email ThisBlogThis!Share to TwitterShare to FacebookShare to Pinterest
Labels: war

Did You Get Pears?

What the heck was that all about? Were they showing us that Don has sunk so low that his decrepit old neighbors don't trust him enough to discuss produce purchases in front of him? Were they telling us that Don has returned to his roots - left upper middle class suburbia for a low-rent dump? Was this Don observing what he might have become - a whiny, dependent old man - if his marriage hadn't ended? Were we seeing that even when he's sunk into alcoholism and isolation, Don is always observing things about people that help him be a great ad man (as opposed to the focus groups he dismissed earlier in the episode)? Was it a comment on the paranoia in America during the 60s? Or was it a coded message to the audience, with pears really being "pairs" - telling us to observe the dualities in the episode?

Could it possibly be that all those meanings were packed into that one, brief, seemingly pointless little segment? Or is this show so enigmatic that we can create our own meaning?

Sometimes Mad Men seems more like a poem than a novel.

Email ThisBlogThis!Share to TwitterShare to FacebookShare to Pinterest
Labels: review

On King Street in the block north of Erb, we already have two bars catering to heavy drinking: the Vault Lounge and Chainsaw. Around the corner on Regina, the patio of the Royal Canadian Legion is another noisy, boozy spot.

New Year’s Eve, 2008, I walked by the Vault with my 80 year old mother about an hour before a massive brawl broke out on the sidewalk. The police called it a riot as dozens of drunken patrons fought; people were stabbed with broken bottles and bones were broken. Last summer the Vault was the scene of another late night brawl.

Now, directly across the street from the Vault and next door to Chainsaw, the Waterloo Theater seems poised to become a nightclub. 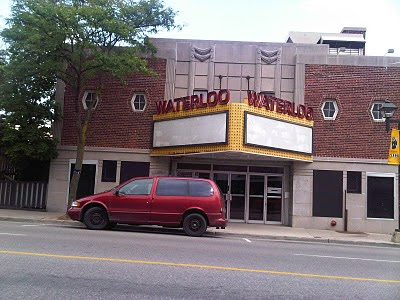 Here's some local buzz about the plans for the Waterloo Theater, which apparently will be called Beta. I'm not sure there's anything to be done to prevent Beta at this stage. A local resident has asked the Alcohol and Gaming Commission to withhold the liquor license, but it's doubtful that that approach will work. If the City of Waterloo had funded the arts to a decent degree (and not thrown so much of available funds into the pit that is the Clay and Glass Gallery), perhaps the previous attempts to make the theater a cultural center (Theater Athena and the Waterloo Entertainment Center) would not have failed.

As a long-time Waterlooian, I'm a bit paranoid about Waterloo suffering the fate of Kitchener. When I was growing up in Waterloo in the 60s and early 70s, downtown Kitchener was a wonderful, vibrant area full of interesting shops. The main attraction was the string of movie theaters along King Street. One of the downfalls of Kitchener was when those theaters got turned into clubs, with all the drunken brawls, public urination and vandalism that goes along with nightclubs.

The core of Uptown is King Street from William to Erb. Uptown needs to expand north up King, and our new nightclub zone is the first block north. The area is slated for streetscape improvements next spring. I'm really concerned that this concentration of booze cans (as the Chronicle likes to call them) will mess up the development of other blocks to the north.

Some of our city councillors believe that any criticism of bars is due to teetotalling tendencies that must be ignored. I disagree. Local politicians may have heard out-of-line complaints about bars; that doesn't mean that all concerns about bars are invalid.

Laurel Trail runs along Laurel Creek and the railway tracks through Uptown Waterloo, Waterloo Park, and the University of Waterloo. It's a beautiful trail and my bike route to work. Here's a particularly pretty spot: 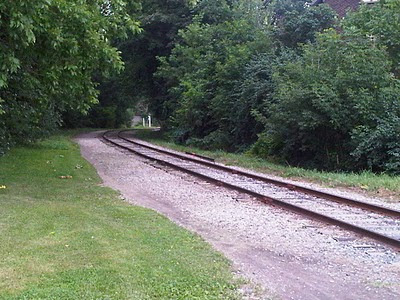 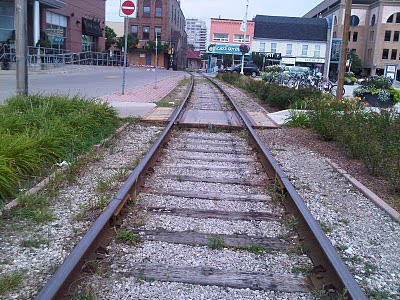 ...and where the trail used to be, west to Caroline: 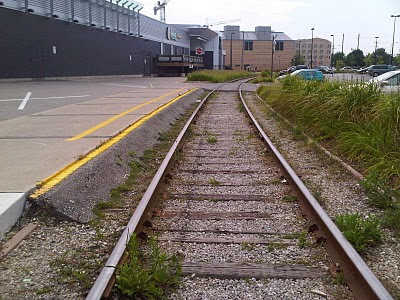 I guess City Hall figured that people following the trail can walk on the tracks or in the parking lot. That's a real pain for bicyclists and roller bladers. Also, the break in continuity is a problem for what is already a poorly marked trail.

Laurel Trail should be clearly marked, be paved, and have snow removal - not be a hodgepodge of unmarked segments of path.

The Iron Horse Trail is also abandoned as it goes through Uptown, picking up as it exits each end. Trails should be showcased in Uptown, not abandoned!

I snapped this picture of Silver Lake in Waterloo Park yesterday. I was standing on the foot bridge at the western edge of the lake. 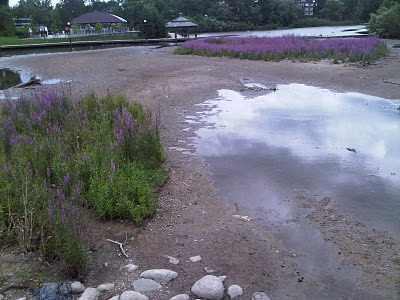 In case you're wondering, that dry land is part of the "lake". Water levels in creeks and rivers around the area are fairly high now, even though it's the middle of summer. Not so with Laurel Creek in Waterloo.

A few decades ago, amid concerns that water levels would rise, the city of Waterloo lined creek beds in ghastly-looking blocks of rocks encased in chicken wire. I remember when they did that to Laurel Creek near Marshall, destroying beautiful banks, trees, and plants. You could see the wheel treads of the bulldozers for years. A beautiful burbling brook became a hideous mess.

The park behind Waterloo City Hall got the full treatment: Laurel Creek was buried at the bottom of a concrete canyon: 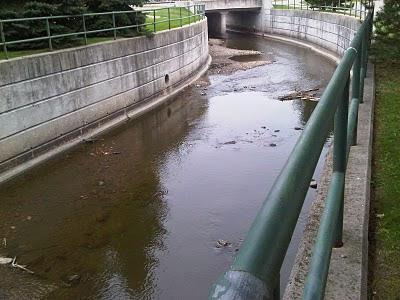 A block away, just across Erb Street in a less heavily travelled area, Laurel creek is in its natural banks again: 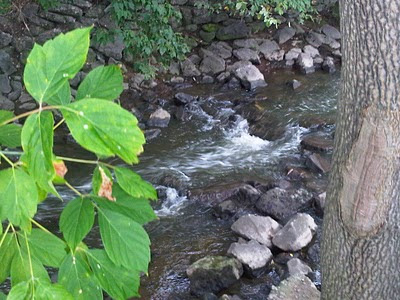 Former mayor Joan McKinnon told me that the water projections of forty years ago turned out to be incorrect, and Laurel Creek has instead dropped in volume. I wonder if there's any way to boost it.

We could have a beautiful (and cooler) uptown if we made the most of Laurel Creek. A hundred years ago Silver Lake was a popular swimming spot; we might not achieve that again, but it could be a pretty place if it had water and maybe even a fountain. Laurel Creek behind City Hall should be naturalized with willow trees hanging over it and rounded grassy banks. It may never be as spectacular as the rushing creek that runs through downtown Boulder, Colorado, but it could be a lovely urban park.