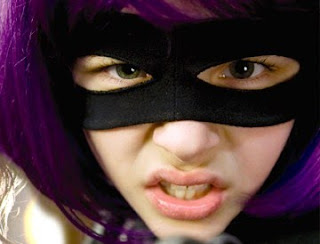 Anthony Lane's New Yorker review of Kick-Ass bugs me - not because he hated the movie and I dug it, although that's true - but because his objections are rooted in the main character being an 11 year old girl.

Lane has various problems with the character who calls herself Hit Girl. He thinks her swearing is a cheap trick to generate buzz. He thinks her presence turns the movie into "cartoon violence" and makes the movie appeal to children. He thinks that viewing it will make children mistake savagery for slapstick and so "coarsen and inflame" them. Underlying all his other criticism, he thinks she's pornographic. While not being able to provide any evidence, Lane is preoccupied with her sexuality; he even says that she is "the dream of every pedophile."

To be clear: the little girl in question doesn't dress provocatively. She doesn't act provocatively. There's nothing sexual about her. If the actress had been 12 or 13 she might have had budding sexuality, but Hit Girl is thoroughly a child.

Lane tries to argue the pornography angle by saying that that the difference between a sexualized child and a violenc-ized child is a "false dichotomy" and a "cowardly distinction". I think he's engaged in some fuzzy thinking there. There is most definitely a difference between a child who is sexualized and one who is violent: there is no child-violence-voyeur equivalent of a pedophile.

There is one major similarity between children who are sexualized and who are violenc-ized: both situations give the child a sense of empowerment but are ultimately damaging to them. But for a pulp fiction movie, the movie is very sensitive to the child's problems. The movie makes it clear that this is one very damaged little girl. She was raised by an insane revenge-obsessed father who made killing a game. When we first see father and daughter, they are standing in a culvert and he is repeatedly shooting her in the chest with a large hand gun (we then learn he's teaching her to get used to her new bullet-proof vest). At the end, she is placed in a safer environment. 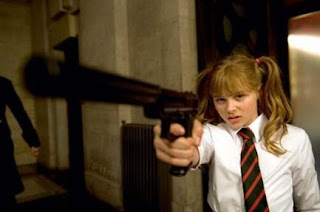 There is shock/novelty value. There may have been an 11 year old pig-tailed assassin in fiction before, but I can't recall when. And Lane is right that the Hit Girl character might appeal to kids - but this is an R-rated movie. As long as a movie is rated appropriately, I don't see how you can criticize its effect on kids.

I can't believe that Lane would have had such strong objections to violenc-izing a little boy. His review, at heart, is just old-fashioned disapproval of girls being action heroes. And he's really, really bothered about it - to the point that he expresses disgust with people who disagree with him - and to the point that he misses the good stuff in the movie.

The actress who plays Hit Girl, Chloe Moretz, has an impressive resume even though she was 11 at time of filming, and she did a brilliant acting job. When she says "Oh daddy, I'm just fuckin with ya", it's a show-stopper. She doesn't swear much in the movie, but when she does it's the best swearing I ever heard. She is convincing in a role that most actors would make laughable.

On top of all this, Lane and many of the other reviewers I read just don't get the movie. It's about the yearning and futility of wanting to be more than you can be. The character who calls himself Kick-Ass wears a baggy mail-order Hallowe'en costume and makes zero progress in becoming a superhero. He has a wealthy classmate who is able to buy a more convincing costume but does no better at the superheroing. Hit Girl is the closest we get to a human superhero, but she's ultimately just a little kid who's over-eager to please her dad. Even at the closest they get, when Kick-Ass dons a jet pack and flies himself and Hit Girl across the city, they have still failed to cross the line between being a superhero and just pretending.

In the short form of the review that appears in later New Yorkers, Lane writes that Kick-Ass "has the makings of a pointed - and much needed - poke at comic book afflatus, but the satire backs away all too quickly." Again, he misses the point. Superhero movies tend to play with the edges of the genre, exploring it and examining its internal flaws, but you shouldn't expect them to satirize and criticize the genre. The superhero genre simply isn't serious enough for satire to have any relevance.

Except for her age, Hit Girl is has a lot of similarities to Uma Thurman's character in Kill Bill, and Kick-Ass owes a lot to Kill Bill. If I hadn't liked Kick-Ass I might have thought it was too derivative. But I wouldn't have blamed it on the kid.

Waterloo Region health officials are agitating against a provincial initiative to allow convenience stores to sell wine and beer. Their argument is that it will lead to more drunkenness.

There is no evidence that convenient liquor sales leads to more drinking, and ample evidence to the contrary (in Quebec and the many US states that allow it). However, common sense is all that's needed to see the benefits: less driving. Beer and wine stores are so widely spread in our area that you practically have to own a car to get to them. In all of Waterloo - a town of over 100,000 people in a massive suburban sprawl - there are only three LCBOs and two beer stores.

Having wine and beer in convenience stores will also make corner stores more profitable, which should reverse the trend of declining numbers of corner stores. That will provide even more environmental benefits as residents won't have to rely on a car to pick up milk, the newspaper, and a host of other items. 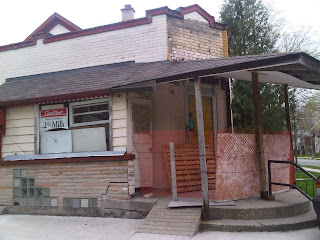 In our older neighbourhoods you can still see where convenience stores used to be. They are usually on corners, and are often either boarded up or have been converted to a residence. They are reminders of a time when families either shared a car or did without, and were able to buy many necessities on foot.

We're always talking about creating a walkable city. This is how you do it: small, pragmatic steps that consider how people really live.

The glorious spring weather makes me think of this poem by e.e. cummings:

when faces called flowers float out of the ground
and breathing is wishing and wishing is having-
but keeping is downward and doubting and never
-it's april(yes,april;my darling)it's spring!
yes the pretty birds frolic as spry as can fly
yes the little fish gambol as glad as can be
(yes the mountains are dancing together)

when every leaf opens without any sound
and wishing is having and having is giving-
but keeping is doting and nothing and nonsense
-alive;we're alive,dear:it's(kiss me now)spring!
now the pretty birds hover so she and so he
now the little fish quiver so you and so i
(now the mountains are dancing, the mountains)

when more than was lost has been found has been found
and having is giving and giving is living-
but keeping is darkness and winter and cringing
-it's spring(all our night becomes day)o,it's spring!
all the pretty birds dive to the heart of the sky
all the little fish climb through the mind of the sea
(all the mountains are dancing;are dancing)

On first reading the poem seems almost treacly sweet, but on subsequent readings there are troubling hints of darkness and derangement. Like... In the third line of every stanza, if "keeping" refers to holding on to a person, then maybe there's some guilt about how his last relationship ended? There's that enigmatic last line of every stanza that's still playful and joyful but also, maybe, a bit troubling - thinking that mountains are dancing seems a bit demented. And the rolling repetitions (yes, yes, yes, now, now, now, all, all, all)... they start out affirming, then frantic, then greedy.

I don't have anything else to say; I think it's a cool poem. It's like a spectacular sunset caused by pollution or a beautiful sheen on the ocean that may be an oil slick or a hilarious friend who's an alcoholic.

Email ThisBlogThis!Share to TwitterShare to FacebookShare to Pinterest
Labels: poem 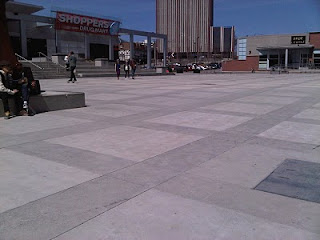 It was a beautiful, sunny weekend, and very little went on in our new public square. Saturday at 3 PM there was a rally protesting two women being asked not to kiss in a local restaurant - and that was it. I took this picture today (Sunday) at about 12:40; there was supposed to be skateboard classes from 11-1 but as you can see, it didn't happen. I went back about three hours later and there were some more skate boarders, plus a few people wandering around looking glum.

I'm not blaming the city - the square is new and they have a limited budget to program it. But this square needs more programming. It's not like a park where people can relax and enjoy the view. We built an expanse of white concrete that requires programming.

We could set up a citizen's committee to help program the square. In addition, organizations such as universities, schools, corporations, arts groups, sports clubs and civic groups could propose events. The Waterloo Public Square provides a lot of opportunities for Waterlooians - let's take initiative.

Update: As it happened, three weeks later on a Sunday at 12:45 I happened by Nathan Philips Square in Toronto. It was much worse! 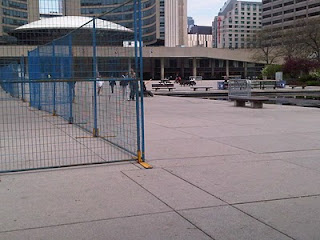 What's With the Harper Conservatives and the Hells Angels?

The Toronto Star says that Rahim Jaffer, husband of Helena Guergis, has been in business with "a man who claims to be a former banker for the Hells Angels."

Guergis is the second member of Harper's cabinet who was ousted due to a political scandal, and the previous scandal (concerning Maxime Bernier) also involved the Hells Angels. While Minister of Foreign Affairs, Bernier left highly confidential NATO documents at the home of a girlfriend who had long-standing ties to the Hells Angels.

It seems reasonable to suspect that the motorcycle gang is attempting to infiltrate government, or at least exert influence through social connections. This is a tactic long deployed by other organized crime such as the Italian mafia. Motorcycle gangs morphed into sophisticated organized crime syndicates some time ago, but public understanding has not caught up with reality.

Many people don't comprehend the difference between groups of motorcycle enthusiasts and organized crime syndicates like the Hells Angels. It's that ignorance that allows the Hells Angels to operate in a quasi-legitimate fashion.

I don't allege that the Harper Conservatives support or condone organized crime, but this second scandal related to the same crime syndicate has got to be a wake-up call to the Conservatives to take more care. All other politicians should take note, as well.