It seems that Harper learned something from the way the Bush government ran their invasion of Iraq: Haiti project goes to Tory-linked firm.
7 comments:

We Are Not the Good Guys

An editorial in the March 13 Globe & Mail starts, "While Canada keeps its human-rights reports on Afghanistan... strictly secret, the U.S. state department posted its 2009 report on its website Thursday for anyone who cares to read it. The report says about its Afghan ally, in part: 'Torture and abuse methods included, but were not limited to, beating by stick, scorching bar, or iron bar; flogging by cable; battering by rod; electric shock; deprivation of sleep, water, and food; abusive language; sexual humiliation; and rape...'"

The US report certainly backs up Richard Colvin's testimony that Afghans detained by Canadian troops were routinely tortured in Afghan jails. Not long ago PMO talking points claimed that the only torture was one detainee having a shoe thrown at him. They were claiming that since Colvin hadn't seen the torture firsthand, his testimony was bogus and the torture never occurred. Plus they were claiming that all detainees were murderous terrorists, rather than Colvin's testimony (backed up by the US reports) that many detainees were just ordinary Afghans who were in the wrong place at the wrong time.

Conservatives also claimed these things in the Comments sections of this blog (eg here). My question is: what do you have to say now? Is the US government lying too?

It's clear now why Harper prorogued parliament. He needed to create a gap in time between all those hateful things MacKay shouted last fall and the exposure of everything MacKay said as utter, self-serving lies. It also gave him time to come up with a new strategy: try to smear the previous Liberal government as much as possible before the full truth comes out so that he can say that he wasn't the only one to blame. (Not that I oppose exposing actions by the Martin government; as Ignatieff has stated all along, the investigation should not exclude Martin.)

Harper's deceitful, undemocratic actions are shameful. But the most important part of this affair continues to be this: When we have armed troops in another country, we have an absolute obligation to respect the human rights of the people in that country - and to be seen to do so. We have failed so spectacularly that we are not only in contravention of the Geneva Convention, but our government is known to be engaged in a coverup of our abuses. We must withdraw from Afghanistan immediately, have a full investigation, and start to think about reparations.

It's a Good Time to Buy a Toyota

For the last few weeks we've been flooded with stories of out-of-control Toyotas that zoomed up to 140 km/hour without driver intent.

I'm no auto expert, but the stories don't seem credible. Braking systems are more powerful than engines so functioning brakes can stop an accelerating car; if the stories are true, then the accelerator and brakes failed at the same time - and then miraculously went back to normal. That seems impossible even with the computer malfunction explanation.

The most plausible explanation is that the drivers panicked and hit the accelerator when they thought they were braking. The more they tried to brake, the faster they went - because they were pressing the accelerator, not the brake. The panic explanation is reinforced by other things in their stories: they always seem to keep accelerating without thinking to put the car in neutral and turn it off.

This is is what I think happened: there was a problem with Toyota floor mats (the original issue) affecting the gas pedal, after which Toyota drivers with this sort of driving mistake in their past started re-remembering their mistake as a fault of the car. That whipped up a mass hysteria. And perhaps Americans who fear for their domestic car industry were happy to feed the scandal.

People who believe that Toyota has a zillion defective cars should take a look at the runaway Audi scandal of 1986. This sort of faux scandal has happened before.

Me, I drive a 13 year old Corolla that has cost me virtually nothing in repairs, and when it gives up the ghost I plan to get a Yaris. There might be some good bargains on used ones...

Email ThisBlogThis!Share to TwitterShare to FacebookShare to Pinterest
Labels: consumers

I sometimes like to think that it's not so much that Canada has a lousier retail environment than the United States; it's that the US has the best in the world, and Canada is not as good but is better than the rest - with the scale continuing to western Europe, eastern Europe, and so on.

But that doesn't change the fact that choices are better in the States; prices can be far better; and the customer interface (shops, web sites, sales reps and customer support) are more enjoyable to work with and more efficient.

Case in point: I need a new ceiling fan. After checking some local stores and not finding what I wanted I looked online and found two models I liked. I called some lighting stores in town and only one had the sort of thing I was looking for. I went to the store and found they couldn't get my first choice but they could get my second, this one from Fanimation:

In an online store in the US, the exact same fan was $1143 ($681 for the fan and $462 for the curvey blades; no tax). There's a $55 shipping charge to Canada and 11% import duty (which is handled by the courier so the fan is delivered to your door), but the dollars are nearly at parity, so the total cost is still nearly half of the store's price.

You might say that's a typical store mark-up, but they don't stock any ceiling fans: they were going to order it from a catalog.

Plus, the price differential isn't even the biggest problem. The lighting store chain's web site is uninformative (it has a lot of pages but no details of the products; the only real info is the address). They don't have any fans on display (just catalogs), yet they only carry parts of three lines of fan - and this was the only fan that was different from your typical Home Depot selection. The staff seemed uninterested verging on surly. I had to stand at a cluttered counter to look at the catalogs. The staff couldn't answer any questions about the products and didn't even give me an exact price (the guy said it would be "around $2400").

In contrast, the US online store had both an 800 number and an online chat service (both of which I used to ask questions about the fans). The guy at the store said it would take six weeks to get the fan, while the customer rep at the US web site said 7-10 days. The US outfit has a tracking page where I can follow my order. At the local store, I have to go to the store to pick up the fan.

I didn't order that fan. I bought my first choice, which was much cheaper, is about the most efficient (in terms of moving the most air) and quietest fan on the market, and has a Calderesque look I like: 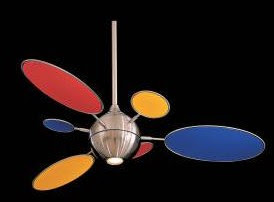 My fan is in the Minka Aire line, which doesn't even have a distributor in Canada. In my town, if you want an artistic ceiling fan - with the exception of waiting six weeks for that $2400 one - you don't have much choice but to import directly from elsewhere.

Is Canadian taste so stodgy that there's no point carrying Minka Aire fans? (The guy in the store said, "I think I've heard other people asking about Minka.") If markets are so efficient, why isn't Canadian retail improving to match the US?

Canada is a great untapped retail market, yet sometimes it seems that US retailers lower their quality when they sell here. For example, a couple of years ago Target (US) and Zellers (Canada) sold the same brand of clothing, but at Target the clothes were well-designed, well-made and 100% cotton, while at Zellers the clothes tended to be chintzy and synthetic. I find it hard to believe that Canadians prefer ugly clothes. A big part of the success of Walmart is that they carry simple, cheap, well-made cotton clothing - even in Canada.

For a short while I ordered books from Indigo rather than Amazon - the Amazon search engine is so much better that I would have to look up the book on Amazon, get the ISBN and then use that to find it on Indigo. I gave up and now order everything from Amazon. Heck, I was at the Information Desk at the library once and the librarian used Amazon to find information about a book. Why exactly is it a scandal that our government might let Amazon expand here?

Is the real problem that Canadians are willing to put up with lousy selection, quality, service and prices, while Americans demand better?

Email ThisBlogThis!Share to TwitterShare to FacebookShare to Pinterest
Labels: consumers

Researchers in the United States say they have turned male frogs into females by exposing the amphibians to tiny amounts of atrazine, a weed killer widely used on corn fields in Canada and often found in water supplies in agricultural areas.

The chemically induced sex change occurred by dosing frogs at concentrations of the herbicide 50 per cent below Health Canada's guideline for drinking water.

The discovery that in an experimental setting atrazine induces sex changes in frogs is likely to further increase the controversy over the chemical, which has been banned in Europe because it contaminates ground water but is one of the most commonly used herbicides in North America.

All the atrazine sold in Canada is made by Syngenta AG, a Swiss-based seed and pesticide producer that has previously disputed findings that the herbicide hazardous. ...Atrazine has been dogged by controversy since the late 1980s, when it was found to cause mammary tumours in one strain of laboratory rats...

A part per billion is an extremely small amount, the equivalent of one second or elapsed time over a 32-year period. The experimental dose used was below Canada's drinking water guideline of 5 ppb, but above the safe wildlife exposure standard of 1.8 ppb. Figures contained in Health Canada's 2007 atrazine evaluation found concentrations in groundwater of up to 1.2 ppb.

Email ThisBlogThis!Share to TwitterShare to FacebookShare to Pinterest
Labels: environment

This is pretty funny, and has a refreshing anti-prorogation message: