(Conestoga College, WLU and UW fares are based on a 4-month term, and I converted that to monthly to compare them to monthly pass prices.)(Update: Perhaps the figure for high school students should be $47, which is the monthly equivalent of a 5-month pass.)

There is something wrong with a system where the privileged are treated to nearly free transit, while the less privileged are forced to pay nearly full fare.

Add to that that the universities are getting a billion dollar train that bypasses most of Waterloo to provide improved comfort to their students, while the Region says it's too poor to create decent bus routes to Conestoga College.

As a UW alumna and Waterloo resident, I'm ashamed.
8 comments:

Loliondo and the Shiek

The A marks Loliondo, a Maasai village and district in northern Tanzania. 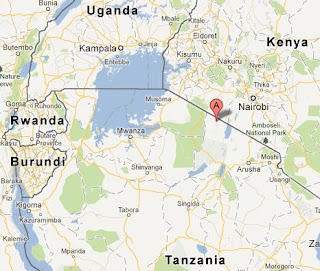 I have written about the Maasai before, on this blog in The Wheat Field, and in African publications in the 90s. In the fight between pastoralists and farmers, I tend to support the farmers, if only because poor countries need food sources. But in the fight between the pastoralists and the oil sheiks who want to turn Maasai land into the Disneyworld of Big Game Hunting, you have to support the Maasai.

At this very moment, the government of Tanzania is evicting Maasai from their land in Loliondo to please Mohamed Abdul Rahim Al Ali, an uber-wealthy Arab who bought the rights to hunt there. This is the sad end to a land dispute that has been going on for over 20 years.

Eighteen years ago, I visited Loliondo and saw what was going on.

The drive from Arusha to Loliondo is less than 400 km, but it's a hard trip. The first few miles are paved, but quickly you have to turn onto a road with ruts so deep that people are regularly killed when their cars roll. The going is slow. About 100 kilometers from Loliondo, in the heart of the Serengeti plain, we had to abandon roads altogether and drive cross-country, navigating by the stars. We used all three of the spare tires on our truck. It's not a trip that anyone would want to make frequently.

The rich man from the United Arab Emirates doesn't have to drive. He built himself an airport. He also built himself a large compound, which for some reason I was invited to visit. Two decades ago large screen TVs and satellite reception were rare even in North America, but he had both in a huge tent with a sand floor covered in layers of carpets. Giant hookahs with many hoses were scattered around, along with large pillows. The compound was surrounded by high fences, and there were lots of security personnel with lots of guns.

Tanzania doesn't allow hunting, but this fellow apparently bought himself an exemption. His airport and compound awaited his occasional weekend visits with friends.

The Maasai are semi-nomadic cattle herders who graze their herds over large areas. They don't believe in killing wild animals, or even their own cattle if at all possible. However, the Tanzanian government (apparently at the behest of this fellow) is claiming that the Maasai are killing wildlife, and that the wild animals need to be protected by ousting the Maasai and their cattle from large tracts of land. The restrictions that are being imposed right now are so large that Maasai cattle herds will have to be reduced by 75%.

There aren't a lot of people in Loliondo, and those that are there live on a narrow margin. These reductions mean depopulation, the end of a traditional way of life, and possibly starvation. For the wildlife they have stewarded so well, the future also does not look rosy: with no laws to stop them, the Arab hunters are already known to hunt from helicopters.

Here's an excellent brief video that shows the Maasai speaking on this issue: Voices of Loliondo.

Tanzania relies greatly on tourism, and so the government is sensitive to international public pressure. There's a petition that needs a lot of support: http://www.avaaz.org/en/stand_with_the_maasai.

Update: I just remembered how I got on to that compound. I met a Maasai man who was selling honey to the cook on the compound, and I tagged along - then got a tour.
1 comment:

What I would do with a 3-D printer

Every time I see a piece of furniture or plant or piece of art or food that I like, I would take a 3-D photo of it and then reproduce it in miniature with my 3-D printer. Then I would build a little house and arrange my little stuff in it. (If this caught on, it could become a replacement for acquisitiveness. Especially if we could melt the plastic back down.)

I would also like to use my 3-D printer to make consumer items instead of going to the store. Maybe also parts for my appliances and automobile and so on. For consumer items (for example plates and bowls), I would like to be able to customize the design.

This raises whole new sets of copyright/etc issues. Please, please, please let design be free. If I have a 3-D photo of my favorite Phillip Hoffman chair and I "print" it for my personal use, will I be breaking the law? What about a Calder mobile? A new roof for my Smartcar? A full-size bust of someone living? (I hate this Brave New World where I'm a criminal for possessing digital copies of things, even though I don't make money off of them. It's an affront to personal freedom and democracy.)

Not that I have a 3-D printer... yet. But the price has dropped to $1200 and they seem destined to be household appliances soon. It's pretty cool that we will all have replicators, but unfortunate that they are restricted to replicating plastic. (That reminds me of a bit from Charles Stross' Singularity Sky: an alien race called The Festival disrupts planetary civilizations by giving the people replicators that require no input, but The Festival is like a genie that never gives you quite what you want: one group gets a replicator that makes nothing but plastic cutlery, and the cutlery endlessly gushes out.) Of course one day 3-D printers may move beyond plastic... maybe soon.

Back in the bad old days we used to be restricted to whatever the local retailer wanted to sell us, be it books or music or clothing or whatever. Nowadays I have a far, far wider choice on the internet. But with 3-D printers the choices will expand again: if I want a little clip to attach my orchids to a stem, I will be able to search for exactly the one I want, and possibly also customize it. This seems like a Very Good Thing.

But as the need for local brick-and-mortar retailers diminishes, urban form will change and new business models will need to be developed. Is anyone ready for that?

I'm only ever-so-lightly scratching the surface of change to come.