The Facebook game Traveler IQ Challenge was created by TravelPod, an Ottawa-based company that was acquired by TripAdvisor in late 2006. The game is fun, educational and thoroughly addictive. This post refers to the World challenge game, but there are other games as well (World Capitals, UNESCO sites, regional games, etc).

Details of the game
The game works like this: the name of a place pops up and you use your mouse to locate it on a map of the world. Your score is presented and then another name pops up... and so on. I play quite quickly and a game takes me 10-15 minutes. At the end you are presented with your final score. If you scroll down the page you'll see the top scores in the world, as well as the top scores of people in your friend list.

The game consists of 12 levels, each with a number of questions. Here's a game I played recently:

The game isn't impossibly difficult because there seem to be only about 300 places that are used so it's possible to memorize them by repeated playing. Also, some countries are more highly represented than others (especially the US, Canada, Italy, England and Australia). For example, the only places it might ask you about in Canada are the Bay of Fundy, Calgary, the CN Tower, Edmonton, Iqaluit, Montreal, Niagara Falls, Ottawa, Portage au Prairie, Quebec City, Toronto, Val d'Or, Vancouver, Winnipeg, and Yellowknife. There are seven places in Norway, about two dozen in Australia, about a dozen in Italy... in most countries there are is only one, or in bigger countries two. There are some islands that are a bit tricky to pin down, but the only one that is still buggering me up is Easter Island, which doesn't come up very frequently.

The following graphics give you an idea of how to score high points. The first graphic shows a very high score: I clicked within 28 kilometers of the target in 1.55 seconds. (The red arrow shows you where you clicked; the green arrow is the correct location.) It's difficult to do much better than this: 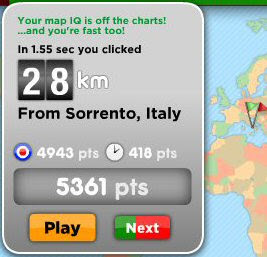 The next graphic shows that it is much better to take an extra second or two to perfect your accuracy. I was almost as quick (1.71 seconds), but I was 800 kilometers off. That cost me 1,543 points for accuracy and 8 points for time: 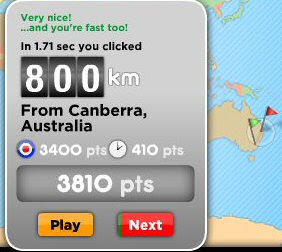 My top score for a game is 631,067. Since there are 130 questions, that works out to an average of 4,854 points per question. I could definitely improve my score. I am still a bit sloppy - I frequently do something stupid like click in Spain when I mean France, or (worse) in Australia when I mean China. (This happens because the world map is quite small.) Also, while I started the game with a good grasp of countries I am still building my city knowledge, especially in China and Russia. And I have to figure out how to be more accurate with spots that have no easy reference points - like the middle of the south Pacific (I can get close, but close might be 1,000 kilometers).

I found that decreasing the resolution on my monitor (making the map bigger) gave my score a boost. I also got a better score when I learned to slow down; in particular, after clicking on a location I pause, read the score and make careful note of the green flag that shows the correct location.

World Challenge IQ shows the top 25 scores in the world. (When you open the game, scroll down and you'll see the list.) The top score is 702,629, which averages 5,405 points per question. That is close to perfection. It would require getting less than 20 kilometers from every location in less than 2 seconds... not bad.

For another good (but simpler) map game, see Map Game.

This is a seriously cool game! I am finding that my knowledge of Africa and southeast Asia is woefully inadequate. My best score (though I've only played twice) is a little over half of yours...

I started out way lower than I am now... I got addicted and spent last weekend playing over and over. I found it easy to memorize most places but China and Russia are still posing some problems for me.

This game is extremly addictive!!! My best score is 614330, but still i need a lot of improve, especially in Russia, China and Australia!

But still.... I think it is almost impossible to get this high score of the first 25 people. IMPOSSIBLE!

with those, i think it is possible to get in the top 25.. you just have to practice the targeting AND timing..

(i assume you guys know where St. Petersburg and Moscow is...)

any tips on how to achieve a higher score? perhaps a larger screen would indeed help..

I am at 635,000 and find hard to get better. I have a lap top with a small screen. For the best ones there must be a trick. An easy one would be to put a trasparent on the screen and mark few difficult spots such as Salomon Islands , Palau etc. For sure this would give you a good boost. Anyway my record was clear and with no tricks...

So I consider myself 'free of this addiction' for now and wish the best for those who are still playing.

Yaman from Istanbul, Turkey (comes up in a level:). Out.

Thanks yaman... I'm impressed by your progress! My problem is getting back to it. I want to, but I know how addictive it is and how much time is required to get good. (I have probably forgotten some of the more obscure islands by now.) I keep thinking that I don't have time to start up again.

wow, that is the most extensive and informational reading i've done on this game!
you are definitely a pro!
i'm only at 514,598, and am having a hard time memorizing my micronesian islands and european colonies

i figure russian cities is almost impossible as there is really no point of reference. moscow comes up so often i can even smell it coming now, but i still can't pinpoint it within 100 km for the reason i've mentioned.

thanks for the tutorial tho! you're awesome :)

One trick I've learned to improve accuracy is to right click and zoom in (can be done multiple times). When completed you right click and choose "show all". This helps nail tiny places like Singapore and Dili-Timore.

I need help with Africa, does anyone have any tips?

I have a fancy for your posts. They are so great and useful. You deserve a pat on the back for your sharing. I wish you can update articles often. I hope I could read them everyday. Your posts offer advice to me. Thanks very much!
Free Rider 3 gogy