It was a joke, ya dummies

At the remembrance day ceremonies in Ottawa, CBC interviewed a guy dressed like a soldier. Later on CBC discovered that the guy was not really a soldier. CBC used print and video to condemn the guy, adding in lots of outrage from real veterans, calls for criminal prosecution, and dark speculation as to why he was impersonating a soldier.

But CBC is still in the dark: the outfit is obviously a gag. Maybe it was a dare. In the background of a CBC video you can see the man and his wife trying to keep a straight face. At one point she is laughing so hard that she wipes tears from her eyes.

This reminds me of the April 1 interview Michael Enright gave to an obviously fake Jimmy Carter, and the front page article in the Globe & Mail that Just Didn't Get the Joke. 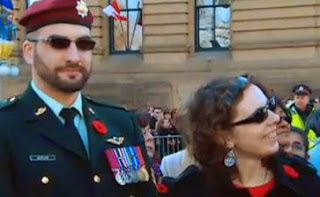 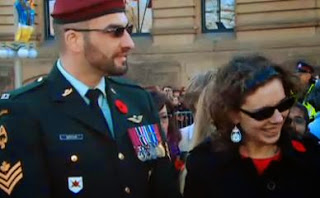 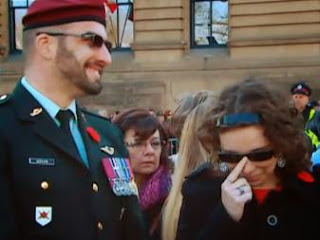 Update: Some time later I read that this guy was convicted for this act. I'm not sure what the charge was. I can see that we might not want people pretending to be military personnel on duty, but impersonating a veteran seems to be a harmless prank. Throwing the book at this guy, or even being outraged at his act, smacks of patriotic hysteria.

So what if it was a dare, joke, or some other levity. It involved deliberately impersonating a decorated veteran on the one day set aside each year for solemn remembrance of the sacrifice actual veterans have made and continue to make.
IMO, it's not terribly different from making fun of somebody with a disability because your buddies might think it funny. He deserves all the opprobrium which is coming his way.

OTOH, I think jail time should be ruled out until the PM publicly apologizes for wearing a pilots jacket and wings.

Memorial Day is a holiday in the US celebrated on the last Monday of May annually.

It's REMEMBRANCE Day in Canada.

To anonymous at 2:04 - thanks for the correction. I fixed it.