The Twisting of Truth: Analysis of an Event

In the Nevada Democratic primary debate, Obama pretended Hillary said something she didn't, and the exchange has been further twisted by media into renewed charges that Hillary is playing dirty. What Hillary said is, in fact, completely accurate and fair.

The week before, Obama had made two separate comments to the Reno Gazette-Journal:

* One quote related to Reagan. Obama said, "I think Ronald Reagan changed the trajectory of America in a way that Richard Nixon did not and in a way that Bill Clinton did not. He put us on a fundamentally different path..."

* The other quote referred to ideas. Obama said, "I think it is fair to say the Republicans were the party of ideas for a pretty long chunk of time over the last 10, 15 years..."

Note that the last 10-15 years does not have anything to do with Reagan, who left office 20 years ago.

In the debate, Hillary referred to the second quote. She said, "The facts are that [Obama] has said in the last week that he really liked the ideas of the Republicans over the last 10 to 15 years, and we can give you the exact quote. Now, I personally think they had ideas, but they were bad ideas. They were bad ideas for America." This is an accurate representation of Obama's second quote and a fair criticism of it. You don't say a group is "the party of ideas" if you mean that they have useless, crappy, or even neutral ideas. Obama was obviously praising the Republicans for being the party of ideas and implicitly criticizing Bill Clinton's presidency (which started 15 years ago) as not having ideas.

The media took Hillary's completely fair comment and twisted it to make her look like a dirty politician. Maureen Down wrote, "Hillary tried once more to take Obama's remarks about Ronald Reagan out of context, making it seem as though Obama had praised Reagan's policies." On Meet the Press, Tim Russert's panel went even further, claiming (by over-emphasizing selective quotes) that both Bill and Hillary had been big Reagan fans and that Hillary was being hypocritical about Reagan. On Hardball, Chris Matthews attacked Hillary for her comment that she hadn't mentioned Reagan; he said, "Why did she deny doing so, clearly having done so, by saying, almost in a high school fashion, 'I didn’t say the name Reagan?'"

The blogs have gone nuts too. Paul Waldman said she "twist[ed] some remarks Obama made about Ronald Reagan and the years since his presidency beyond all recognition." Even Ezra Klein mistakenly said that Hillary exaggerated Obama's comments about Reagan.

This is not just about Hillary. Whoever is the Democratic frontrunner is going to be subject to this sort of distortion. Al Gore was briefly made to seem a delusional liar and John Kerry was made to seem a coward, and now Hillary Clinton is being made to appear a dirty politician. It's a lie.

Hillary has been the clear frontrunner for a year (see chart below), but Obama is catching up quickly. When he is the frontrunner, the character assassination will switch to him. We never learn. 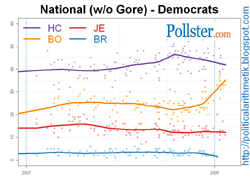 You said: "You don't say a group is "the party of ideas" if you mean that they have useless, crappy, or even neutral ideas."

Are you sure of that? Ever since I've followed American politics that the GOP has quite clearly had more "ideas" and a more clear direction in which they would like to take things. Their ideas were, as Clinton said, "bad ideas" no doubt; but the statement that they had more "ideas" should be pretty uncontroversial to anyone who has actually followed US politics over the last decade.

Obama was dead on. One of the greatest strengths the GOP has had over the Dems in recent years is a clear agenda. That will appeal to people regardless of how bad those ideas are.

I'd have to respectfully disagree on the "party of ideas comment". I'm sure what Obama was saying was that the Democrats HAD NO ORIGINAL IDEAS, and like them or not, the Reps had ideas. Sure the ideas reflected their ideology - which we can't agree with, but still they were expressing their ideology - and getting it across to the American public.

We can actually say the same here. For about a dozen or more years WE (Liberals) were the party of ideas - when it comes to public perception. Over the past 3 or 4 years all the public has seen has been a party of squabbling (other parties squabble, but ours were often too public), a party without a clear public voice (the media is partly responsible for that). Sure, we'll come back, but it will take time to see everyone "on message", with the media reporting things accurately, etc.

So, you see, it's not about supporting the others' ideas - she really was twisting his words. Ever hear of the old adage about learning from your enemies? The Dems did a poor job at communicating, and by supporting the Reps so many times - instead of being original - they ceased to be a party of ideas to the American people. I think Obama is wishing for the days of Kennedy...

Everyone has ideas. Party of ideas implies good ideas to me.

The other thing about this is Obama's attack on Bill Clinton. Both of those quotes are unfair digs at his presidency. Obama is trying to describe the last Democratic presidency as a failed effort. In reality, it was a great success. Bill brought good governance and prosperity to the country. He wasn't able to do as much as he wanted (like universal health care) because Americans voted in a Republican congress.

Interesting graph. The press never mentions how far ahead Hilary Clinton has been all year. They make it sound like she's been neck and neck with Barack Obama. Heck, they made it sound in New Hampshire like her candidacy was over, when she was 20 points ahead!