I read a lot of science fiction, so I may be a little paranoid about the possibility of our freedoms being stripped away by a megacorporation that uses human life as a disposable raw commodity and makes us live in underground warrens where everything is painted white and lit by fluorescents and we have to wear identical one-piece jump suits with a number on the back and eat protein pellets and old people sit around telling children about things they remember from their youth, like voting and the sky.

Also, I just watched the movie Recount, which I recommend highly but which scared the crap out of me to the point that I had to watch it in short bursts because while the movie is engrossing, the story it tells (of the US 2000 election) is astounding and tragic and devastating.

That's my caveat as I start this post about Palm Jumeirah, Palm Jebel Ali and Palm Deira. 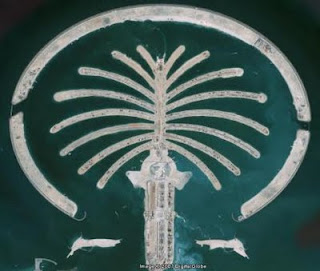 Pictures of this stunning development in Dubai have been wowing us for years. The first and largest artificial island, Palm Jumeirah (shown right), is designed for a population of 2 million people. Most houses have a beach and many have marinas. There are also dozens of high rise condo buildings, 100 hotels and on and on. In total, the development has three island complexes that were designed to house nearly 5 million people. Prices were originally very hefty, with a 14,000 SF undeveloped plot of land starting at about C$2M. Movie stars and other rich people bought up plots like crazy; some have already moved there. (The development is still years from completion, delayed by the current economic troubles, and prices have fallen.)

Futuristic paranoiacs (paranoid futurists?) like me are somewhat mollified by the thought that people with democratic freedoms would not just throw them away - and even if they wanted to, we have institutions to protect us from ourselves. To lose our freedom, there would have to be some sort of perfect storm of events.

When I started to research Palm Jumeirah and its sister islands, the first thing to set off alarm bells is that there will be no local government or citizen representation - the entire 5 million population will be administered by the corporation that built the islands. Or as that corporation, Nakheel, puts it, "Nakheel Asset Management (NAM) team will provide a top quality community management service to Palm Jumeirah's owners and residents." Note that's community management, not just property management.

Nakheel's literature about the islands has a large emphasis on "community", but community in their context means consumption and amenities. In pages about community, there are lavish descriptions of shopping, golf and gyms. There is nothing about local government, civil society, laws, codes of conduct, social services or means of communication. Your average North American subdivision provides more information.

The Palm artificial island development is just one of many megaprojects by Nakheel. Here's the Resident's Hub for residents of International City, another Nakheel development in Dubai (it's difficult to find how big it will be, but one of the five original districts is designed to house 120,000, and it seems that four additional districts have been added). The hub has a dizzying array of rules, many so vague that they could be interpreted to restrict almost anything, and after a lot of digging I found a page that suggests that Nakheel Corporation makes all decisions that would normally be made by the government. It's fair to assume that the Jumeirah islands will be governed in a similar way.

It's not just anywhere that you could strip away the rights of an entire city of 5 million wealthy people. Dubai has been ruled by the Al Maktoum dynasty since 1833. The government and private sectors are closely entwined, with Sheikh Mohammed bin Rashid Al Maktoum being Dubai's ruler and Prime Minister of the UAE, but also the vice-president, founder and majority stakeholder in Dubai World, a private company that manages businesses for the Dubai government. (Dubai World was in the news recently when it informed its creditors that it can't pay its US$60B debt. That debt represents three-quarters of the debt of Dubai, so Maktoum was pretty crafty in creating arms-length liability for his government finances.)

The company that is building the Jumeirah islands - Nakheel - is a subsidiary of Dubai World, so while Jumeirah presents itself as a private development, it is really a project of the ruler of Dubai.

In 2006 Dubai had 1.4M residents, only 250,000 of which were citizens. Another 250,000 are foreign laborers, many living in appalling conditions and not making enough money to be able to return home. In response to falling property values, Dubai is introducing new laws to protect property owners, but in response to protests by foreign laborers, it has filled its jails. This is already a corpogovernment that exists purely to enrich itself.

This all took an obvious path. Countries in the middle east had to diversify beyond oil, and Dubai has been very successful in the areas of tourism and property development. At one point, property development accounted for 32% of its GDP. A lot of people like the idea of an endless summer, and the middle east has a very nice climate (in Dubai, there is little rain and it is never cold, although five months a year the average high is more than 100 F). So why not attract massive population shifts? Start with the rich, which gives a glamorous cachet to the idea of living in the Persian Gulf, and then build cheaper homes, and cheaper, and cheaper. Nakheel is already starting to develop a number of other artificial islands in the Gulf. Jumeirah is attached to the mainland by a bridge, but the newer islands are miles from land.

There are beautiful pictures of the Jumeirah islands taken from the international space station. When you see closer views, a few problems emerge. 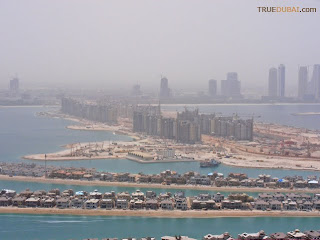 In some photos the air is hazy, probably from sand or pollution. The houses are built extremely close together: several million gets you a few feet of space from your neighbours. The emphasis on beachfronts means there is a lot of driving required to get anywhere - some public transit is proposed, but there are no details of how extensive it will be.

The economic downturn has resulted in the reduction of public services. Tight corporate restrictions on resident activities means there aren't a lot of alternatives - or avenues for complaint. 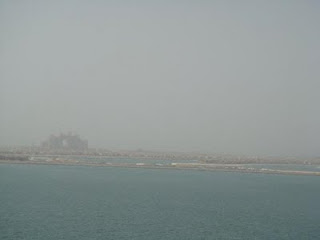 At inception, there seemed little to worry about. If Brangelina don't like the way their community is governed, they can pack up the kids and move elsewhere. But when you start to consider a much larger and less powerful group of residents, many living miles from land, with all means of communication, transportation, life support and other community decisions being made by a for-profit corporation - and then think of possible futures when there might be a war or a severe economic downturn, when there might be water shortages or food shortages - then it isn't such a big jump to get to soylent green.

That sounds a little like OCP, the mega-corporation in that cinematic masterpiece, Robocop.

Jumeirah Islands will be a first Islands map on the world.Great Artificial Islands looking very beautiful.

*MINA by AZIZI* is a high-end serviced residential apartment building with hotel facilities at the Palm Jumeirah  Dubai. The building features a unique design that creates a unique look with access to a private beach .
It features 178 luxurious apartments that offer an unparalleled level of convenience and amenities. Each apartment is furnished and delivered with a modern and fresh interior design.

You can explore below boat trips in dubai.