The LRT is going to replace the existing iXpress bus route. In many locations, the LRT stations are going to be much less convenient than the iXpress. Here is one example.

As the following map shows, the iXpress currently stops in the middle of the Park (the bus stop is labelled iXp). The LRT, however, has to run along the rail tracks, and so it stops on the extreme eastern edge of the Park, towards the north end. This is a kilometer from some of the existing buildings in the R&T Park, and further than that to the campus. 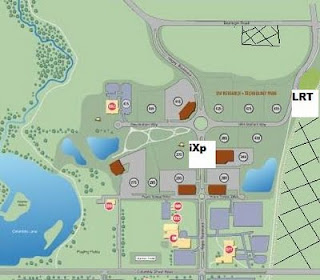 In this map, which is from the university web site, I've x'ed out the portions that are not university land. The brown blobs are R&T Park buildings. This map is a little out of date: there are two new buildings on the west edge of the Park, far from the LRT stop, and one new Open Text building on the south-west edge, even further away.

The iXpress costs a tiny fraction of the what the LRT will cost. It is comparable in speed, and its service can be expanded to carry all the riders the region predicts to have for decades to come. Plus, its stops are more convenient. Why is the region planning to spend $800 million to give us less convenient transit?

Update: After a correction in the Comments section, I moved the LRT station on the map approximately 1/4" to the south.

Update: The University of Waterloo has just announced a massive increase in development in the R+T Park, filling up the north and west portions of the North Campus lands - the furthest from the LRT station (an area that runs off this map to the top and left).

First of all, on the maps the proposed station is further south than you drew it. And then you conveniently left out the "non-university lands" -- even though you yourself have emphasized how well the light rail works for UW. In this case it happens to also work well for Raytheon and most of the RIM campus on the other side of the tracks on Phillip St. It's also close enough to make MKS, Sandvine, and IBM on Albert St a half-mile walk from the station.

That said, the R&T Park is nowhere near fully built up. Most of what will be the R&T Park in 10-15 years will be much closer to the light rail stop.

Nope, I meant "less convenient to the R&T Park". The iXpress stop is in the middle of the Park. The LRT stop is on the eastern border of the Park, towards the north. It services much less of the Park than iXpress does. And while some of the new buildings may be closer to the LRT stop, some of them may be farther away, such as at Hagey and Bearinger.

As to my map, I double-checked the region maps (here), and my map is correct. The LRT station will be at the bend of railway tracks just south of Bearinger. If you have other sources, please let me know.

What they'll do about Phillip Street is an interesting question. Are they planning to build paths from the tracks to Phillip? Currently it's a bit of a scramble to get through. (I've worked on that stretch of Phillip as well as at two buildings in the R&T Park, so I know the area pretty well.) I'd be surprised if any of that land on Phillip has rights of way that could be used... in which case could they expropriate? I don't know how that works.

I guess my attitude is this: the LRT has been approved, and yet it has some massive problems. I want to expose those problems, and I want those problems to be considered before it's too late. In this case, it may make more sense to put the LRT station on the east side of the tracks to service Phillip Street, and then call it the Phillip Station instead of the R&T Park Station. There are more blue collar jobs on Phillip which may mean more transit users than the Park, which mostly has highly paid high tech workers. Added to that, we may want to keep the iXpress running to service the R&T Park.

I think the LRT is a mistake, but I'm more focused now on improving it.

By the way, I appreciate your comments. You may be the only person reading my LRT posts.

Don't worry, Michael isn't the only one who reads your LRT posts. :)

I will just mention one point in this comment, which is that light rail will actually offer dramatic improvements in travel time over the iXpress. I'm planning to write a more in-depth blog post about this, but I'll give a couple of examples here.

Conestoga Mall to Fairview mall on iXpress: currently around 44 minutes on average; as long as 48 minutes depending on the run. 2014 projection: 51 minutes. Light rail: 38.6 minutes. (And this is despite light rail having two more stops.)

Those numbers come from the Transportation Modelling Report, tables 12 and 14, and from the current iXpress timetables.

It's good to know that these comments are appreciated, and I'm glad to hear you are interested in improving the plans.

This PDF from the functional design plans shows a station right at the bend in Wes Graham Way (i.e. south of where you drew it): http://rapidtransit.region.waterloo.on.ca/pdfs/Waterloo_Waterloo_Spur.pdf It also shows a crossing of the tracks. A sliver of land for a path to Phillip could definitely be expropriated, though I'm pretty sure the owners of those buildings would hand it over willingly.

The station could be called R&T Park - Phillip, or maybe even just Phillip, just because it's a cleaner name. I don't think this matters too much.

I don't think keeping the iXpress around purely for the west part of the R&T Park makes sense (because the vast majority of it would duplicate the light rail and such buses would run pretty empty). However a circulating shuttle between the station, the west end of the R&T park, and the planned northwest UW campus developments would probably be a good idea. I believe I've seen something like this in UW plans.

A 7-minute reduction in the time from Conestoga Mall to Fairview Mall fits with what I have been told by regional planners in the past. That's not much. But of course there could be greater time reduction in the section that goes through Waterloo Park because it's off-road.

Re my map, you're right... I had the wrong bend in WGW. I have even walked over there and checked out the site... duh. I'll correct my map. (Thanks.) That is still over a kilometer from some existing buildings, and it's even further from Bearinger-Hagey.

Doesn't the iXpress stop at WLU? That seems like another advantage we will lose. Plus, the buses all stop very close to a Conestoga Mall entrance, while the LRT will stop on the west side of King Street, a fair hike from a mall entrance.

If they changed the name to "Phillip Station" that would have all kinds of advantages, including publicity and ensuring a proper path was created to Phillip that is ploughed in winter. It also would clear up some misinformation in the Park.

Yeah, not all of the R&T Park will be close, but this station is still within a reasonable distance of a fair amount of the R&T Park, the Phillip/Albert offices, as well as some of the residential and commercial areas around Albert & Bearinger.

What's more, UW intends to expand far beyond the reach of even the current iXpress stop, with their northwest campus plans. Maps and talk of a campus circulator service can be found on the Campus Master Plan: http://plantoperations.uwaterloo.ca/cmp/cmp.php

I don't think the Conestoga Mall entrance distance will be a big deal. Less than 150m to the mall entrance is really not that bad. But sure.

The LRT station is going to be a hike to Conestoga mall. Some region maps show a pedestrian overpass to get across King, which would require stairs-climbing; if we don't have that, they have to go back to the main intersection and then down to the mall: that's more than 150m of walking. It probably won't be any impediment to single 20-somethings but will definitely be a problem for people with children, for seniors, for people carrying shopping, and many others.

The inconvenience of LRT stations means that on smog-alert days seniors and people with certain medical conditions can't use the LRT.

It also means that ridership will suffer.

The one thing in favor of the LRT is that it's going to cause such traffic chaos in areas it goes by (as described in my recent posts) that it will make all other forms of traffic less desirable. In other words: it won't be very good, but it will lower the quality of transit around it. That will just encourage people to avoid the core and to stick to the hiways and suburbs.

The importance of the distance of the LRT station from buildings in the R+T Park is that the university, and the companies in the Park, are counting on the LRT station and are making decisions based on its being a reasonable way for workers to get to the Park. This station has been sold as a good, convenient way for R+T workers to get to work, and that is incorrect. It's just another planning disaster related to the LRT.

Update: I have moved offices, from the R+T Park to Phillip Street, so I'm now closer to the proposed LRT stop, but I can't find a way to get across the railway tracks to it. Is there any plan to obtain a right of way from one of the Phillip Street properties so people can get to the station? There might be legal impediments in having an official crossing of the rail tracks.

A few years ago when I worked on Phillip there were paths to the tracks. It was a bit tricky to get across a broken fence and water-filled ditch, but not really a problem. Now there are new, sturdier fences and the little make-shift bridges have been removed from the ditch. I haven't explored the entire length yet.