What LRT Will Do to the King-Erb Intersection

The major intersection in uptown Waterloo is King and Erb. It is the busiest intersection in uptown, both for cars and pedestrians. It has historical landmarks on its corners. All the major parts of uptown are close by: restaurants, shops, cinemas, Waterloo Square, the library, an office tower, a hotel, and so on.

Of all the problems that the proposed LRT will cause for uptown, this intersection may be the most serious issue.

Here is a snippet of the Region's LRT map showing the King-Erb intersection after LRT (you can see the complete map here):

The proposed LRT tracks (shown here as a thick pink line) run along the right side of King (the east side), and then turn left across the Erb Street intersection to run along the north side of Erb.

The Region's map is a little difficult to read, so here's my rendition of it: 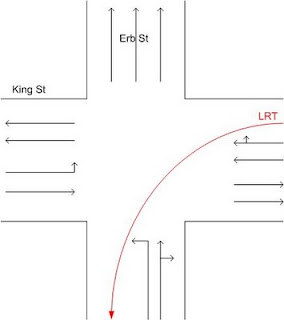 The LRT is scheduled to run every 7 minutes, so every 7 minutes all traffic is going to have to come to a halt to let the LRT go through. This isn't going to be a little streetcar turning left through our busiest intersection: this is going to be a train. In addition to those stoppages, we'll still need the same number of red lights that we currently have.

If you look closely at the lane markings, the LRT plan has only two lanes on Erb Street approaching King. One is a left turn lane, so there is only one lane on Erb that crosses King. That single lane is also a right-turn lane. Since there are a lot of pedestrians at King and Erb, cars turning right regularly hold up the cars behind them. Currently Erb has three lanes that continue across King Street. If you stand on the corner and watch traffic, you'll see that there is a very busy flow of traffic heading down Erb across King Street. That's because Erb is the main east-west artery through town. If you don't take Erb, you have to drive over to University or Columbia to the north, or Union to the south.

In addition to the problems that LRT will create at King-Erb, the current plan for the LRT messes up most of the major intersections in uptown: Erb-Caroline, Albert-Erb, and William-Caroline.

I know there are people who believe the solution to our environmental problems is to make driving so inconvenient that people leave their cars at home. That's not how it works. There are wide roads and big parking lots at the Wal-Mart that was built just outside the boundaries of Waterloo. The expressways go right to the malls, the big box stores, and Wal-Mart.

When you create this amount of havoc in a downtown core, you kill the downtown. Once it's killed, it is really difficult to revive it. Just ask Kitchener: they've spent decades and tens of millions of dollars trying to repair the damage done to their core and it's still a mess.

We cannot allow the LRT to go through Waterloo as planned. It cannot come into Waterloo from Kitchener and then turn left across King Street. That would be disastrous. I oppose the rail option on many grounds, and think buses are a far better alternative, but if we must have a train running through our town, it cannot go on this route.

Update: At the 11th hour, regional councillors voted to change the route so that it no longer turns on Erb. Instead, it turns half a block earlier and runs along the railway tracks. As this was the major request in my last submission to Council, I felt pretty good about that.

Thanks for your explanations of the intersections, etc. I've read your posts back to July. It has increased my understanding immensely. What is the region thinking?

My husband recently joined the T4ST group. So I have read some of their material as well. A couple of questions come to mind that perhaps you can answer.

1. With the curbs or raised platforms the trains will run on, will they be accessible to the handicapped or those with walkers or strollers?

2. Will people be able to cross the road on foot over the tracks away from intersections?

3. City buses now have bike racks. Will the LRT accommodate bikes as well?

Thanks for doing the research and posting your thoughts.

When I ask the region many questions about this, a common answer that my issue is an implementation detail that won't be known until later. It's quite frustrating. But I can make some guesses.

1. At intersections the tracks will become flush with the street, and that includes the pedestrian crossing part of the intersection. It will be more difficult to get a walker or wheelchair across, but no more difficult than it is to cross streetcar tracks in Toronto - essentially, it will be a little bumpy.

2. I think people should be able to cross the tracks on foot away from intersections. There was some discussion by the region of putting up posts to keep cars off, but people could get through those - and I haven't heard that lately. There has been no announcement of what they plan to do in Waterloo Park, but my guess is that they will eventually have to put up a high fence around the tracks as they go through Waterloo Park because of children running around in the park, as well as animals.

3. Great question about bike racks. I have no idea. I suppose they could allow people to bring their bikes on the train, as is done in Toronto with streetcars.

I resent your assertion that downtown Kitchener is "a mess". There are many funky businesses, lots of historic buildings and (eventually) a revitalized King street. There are several parallel streets to move the traffic through (Weber, King, Charles). There are a few empty buildings, some street people and a few lost souls. (I think we are supposed to call that a "diverse community"). But the space in front of city hall is vibrant and hosts many events, and the downtown Business Association does a great job in promoting activities.You can check out www.downtownkitchener.ca for a list of events and to get added to their bi-weekly email list. I know there are many people stuck in "uptown" Waterloo that don't know about the cool things happening in Kitchener.

My apologies for slagging downtown Kitchener... It is starting to pull back from its down days. And it has always had redeeming value. But it's still struggling with crime and struggling to be an economic success.

And I think you have to admit that the current state of downtown Kitchener is due to a Herculean effort over many years and with a huge infusion of money. My argument is that we shouldn't let Waterloo fall into that position.

Kitchener was a wonderful place in the 60s, and the first cracks started to show in the early 70s, when cheque cashing stores started moving in. I watched the decline happen over many years: the movie theaters turned into clubs; Goudy's went under; there were regular (mostly suspicious) fires; most of the retailers (independently owned local institutions) closed up.

I have heard a ton of explanations for what caused the decline. In terms of reducing our sense of pride of place, tearing down the old city hall and farmer's market for the Eaton Center had to be a major factor. Moving the market into a parking garage really didn't help.

When the independents died and were replaced by either nothing or more generic stores, it became less interesting to go to downtown Kitchener. You could buy the same stuff at any one of our malls (including Westmount Place), and the malls were much more convenient, especially in winter. And had easier driving and parking.